Dr.Mahathir Mohamad Speaks Through His Arse! 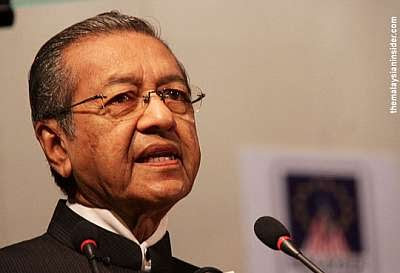 This is the same very Man who has no regard for The Law. During his 23 years of Premiership, HE was The Law. Today he says that Muslims Politicians shouldn't go through the legal process instead should opt for swearing upon the Holy Quran! What a fucking joke?!

Former prime minister Tun Dr Mahathir Mohamad said that Muslim politicians should start practicing ‘swearing’ in the name of religion instead of suing each other in the legal courts. He said that if they do so, then this can avoid clogging up the courts with what he called ‘frivolous allegations’ and the judges could be left to attend to other more important cases. Mahathir said that lawsuits have been used by politicians to legally gag their opponents and this would usually drag for years. One of the cases involved him and current opposition leader Datuk Seri Anwar Ibrahim where he was only awarded RM70,000 in legal fees which went to his lawyers.

KUALA LUMPUR, Jan 11 — Tun Dr Mahathir Mohamad suggested today that Muslim politicians consider “swearing properly” to fend off allegations instead of clogging up the courts with frivolous lawsuits.
“For Muslims, they should be willing to swear properly that there is no truth to the allegations,” the former prime minister wrote in his popular blog under the nom-de-plume Chedet.
“Then there would be justice and frivolous cases would not be brought before the courts. The judges would then have time for their other cases,” the still influential 85-year-old added.
Malaysia’s fourth prime minister who retired in 2003 after serving for 22 years pointed out that lawsuits are often used by litigants to legally gag their opponents as comments on the case outside the court could be considered “subjudice”.
He added that the court case could drag on for years before being settled, and that it was “grossly unfair” to the defendant who was often sued for millions of ringgit over “baseless allegations” but was not usually awarded the same.
Dr Mahathir said he had once been sued for RM100 million and won only RM70,000 in court costs, which he said went to his lawyers.
The defamation suit had been initiated by his former protégé and one-time deputy, Datuk Seri Anwar Ibrahim, who accused Dr Mahathir with slandering him at a human rights conference in 2005. -The Malaysian Insider
Posted by Joshua Lopez at 10:33 AM