Princess Catherine She Is! 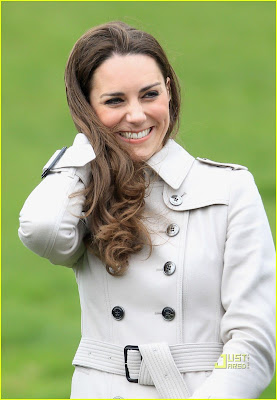 He's only been Duke of Cambridge after Marriage, but a new report out claims Prince William is not too happy with the royal title given to Kate Middleton. Prince William requested his grandmother, Queen Elizabeth, give his bride the title 'Princess,' the Daily Telegraph reports. Instead, Kate was granted the title Her Royal Highness Catherine, Duchess of Cambridge.
Wiliam, while said to be honored to be given the title 'Duke,' also reportedly requested that he keep his title 'Prince.' With that he is said to have preferred that Kate Middleton go by 'Princess Catherine.' However, the title 'Princess' is traditionally reserved for those born into the royal family, not those who marry into it.

But what about Princess Diana? Princess Diana, as she was commonly referred to, was actually Diana, Princess of Wales and was not actually a princess as she herself pointed out. She was given the title of Princess of Wales when she married Charles because he was (and still is) the heir to the thrown. That title is typically given to next in line to the British monarch.

Buckingham Palace has responded to the Kate Middleton Royal title controversy saying, '"If people wanted to call Catherine 'Princess', they were welcome to do so." A spokeperson for Prince Charles even went so far to say the public may be 'encouraged' to call the young royals Prince William and Princess Catherine.
Posted by Joshua Lopez at 1:21 PM