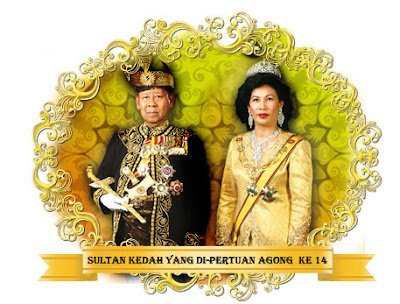 He is the third youngest monarch to ascend the throne of Yang di-Pertuan Agong after Tuanku Syed Putra of Perlis and Tuanku Mizan Zainal Abidin of Terengganu.
During his kingship, Tuanku Abdul Halim presided over the first transfer of power of the civilian government when his uncle, Prime Minister Tunku Abdul Rahman resigned in favour of his deputy Tun Abdul Razak. Tunku Abdul Rahman had felt that he should not serve under a nephew, given strict Malay royal protocol, but agreed to stay on as prime minister for one day of Tuanku Abdul Halim's reign.

In October 2011, Abdul Halim was elected to serve a second term as the Yang di-Pertuan Agong to commence on 13 December 2011. He will become the first person to hold the position twice. A council of regency consisting of his brothers Tunku Annuar, Tunku Sallehuddin, Tunku Abdul Hamid Thani, and daughter Tunku Puteri Intan Safinaz will discharge his duties as Sultan of Kedah while he serves his term as King.

http://www.malaysian-explorer.com/muziumNegaraD11.html
Posted by Joshua Lopez at 10:03 AM