Mahathir Mohamad A Lunatic Spiralling Out Of Control! 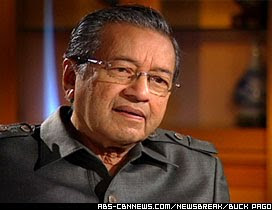 This Lunatic Man can't keep his hands out from the government since retiring in 2003. He had a part in the use of the country's high end uniformed forces in July 2011 to mishandle Malaysians calling for a clean and fair election via BERSIH 2.0

Now, he has placed his hands again in the Right To Assemble as stipulated in Article 10 of The Federal Constitution, he has been the mastermind in the sudden birth of new Assembly Bill which is highly restrictive and very obviously a method to Kill BERSIH 3.0! Mahathir continues to remind Malaysia her dark days under his dictatorship! And yes, He is Spiralling out of control!

He continue to brain wash and program the minds of Malays that their religion and race is on highest threat, sending alarming fears to the uneducated and unexposed rural folks. His attacks on Christianity and Non Malays overpowering Malays shows no signs of ceasing, He is crafting racial tension and possible riots! This Man is The Biggest Threat To Malaysia but he finds it right to call upon the arrest of former President Bush and former Prime Minister Tony Blair for War Crimes. What about the Crimes that he has committed on his own people?!
Posted by Joshua Lopez at 10:05 AM