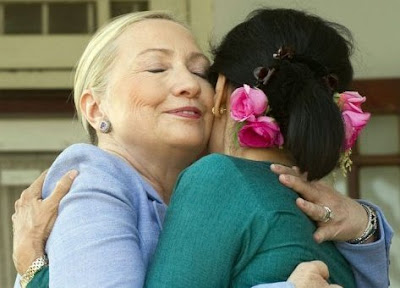 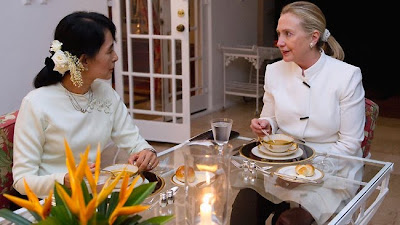 May Justice, Freedom & Liberty Live To It's Fullest In Myanmar!

Yangon, Myanmar (CNN) -- U.S. Secretary of State Hillary Clinton will continue her landmark visit in Myanmar on Friday by resuming a meeting with Aung San Suu Kyi, the Nobel Peace Prize winner who intends to run in upcoming parliamentary elections with her newly registered political party.
The secretary will tour Suu Kyi's home, where the activist spent most of the last two decades under house arrest imposed by Myanmar's military regime.
Clinton will also meet members of Suu Kyi's National League for Democracy, representatives of ethnic groups, and civil society organizations, according to the State Department.

On Thursday, Clinton, the first U.S. secretary of state to visit the country in 50 years, held a lengthy conversation with Suu Kyi, and the two women discussed matters ranging from books to political candidacy.
Clinton is in Myanmar to urge democratic reforms. Suu Kyi is regarded as the Southeast Asian country's leading reformer for democracy.
Read U.S. President Barack Obama's letter to Aung San Suu Kyi

Clinton has told the country's leaders that the United States will help Myanmar economically and diplomatically if reforms there continue. On Thursday, she sat down with new President Thein Sein, who told Clinton about the importance of Myanmar's relationship with China, a senior State Department official said.
Sein said that his country sits at an "enormous crossroads" between India and China and needs to have good relations with both, the official said. Clinton told him that the United States wants Myanmar to have a good relationship with its neighbors, the official said.

Clinton held out the possibility that the United States would send an ambassador to Myanmar if reforms continue. She said the United States would support World Bank and International Monetary Fund trips to assess how they can help the country. Washington will help the United Nations Development Programme establish a micro-finance program in Myanmar and invite the country to join the Lower Mekong Initiative, a regional environmental and health organization, Clinton said.
Suu Kyi met with Clinton Thursday night in Yangon at the residence of the U.S. Chief of Mission for a quiet dinner.
Suu Kyi supported an American ambassador returning to Myanmar now, but Clinton told her not yet, the State Department official said.

The official described the U.S. posture as "careful and realistic" but wouldn't say whether the United States trusts the Myanmar government when it pledges to continue reforms.

On Thursday, Clinton extended an invitation for the foreign minister to visit Washington and he accepted, but no date was provided, the State Department official said.
On Thursday, the United States and Myanmar agreed to resume the search for missing American World War II soldiers, the official said. About 600 personnel remain unaccounted for.
Clinton's trip was made possible by the nation's unexpected steps at democratic reform.
Ruled by a junta since 1962, Myanmar elected Sein, the new president, in March. The new government freed dozens of political prisoners in October.
On Wednesday, Suu Kyi -- released from her latest round of house arrest in November last year -- said she intends to run for parliament.
The developments prompted cautious optimism for the United States, which still refers to the country as Burma -- the name it used before the junta took power.

The trip, the White House said, is an indication the time could be right to forge a new relationship between the nations.
Still, Myanmar is far from a democracy -- and skepticism exists on both sides.Journalists in the country enjoy some new freedoms, but the press is still heavily regulated. Ethnic violence still exists against Myanmar's minorities, and human rights groups estimate that more than 1,500 political prisoners are still detained.

Suspected cooperation between the government and North Korea on ballistic missiles and nuclear activity also is troubling to the United States.

As a result, the Obama administration is not ending sanctions and is not making any abrupt changes in policy.

For its part, Myanmar offered a cordial welcome to Clinton -- but the visit itself was low key.
On Thursday, news of her trip and a photo of her greeted by officials at the Naypyidaw airport was on page 2 of the state-run newspaper, The Mirror. In contrast, the front page carried a prominently placed photograph of Mikhail Myasnikovich, the prime minister of Belarus -- who arrived Thursday.