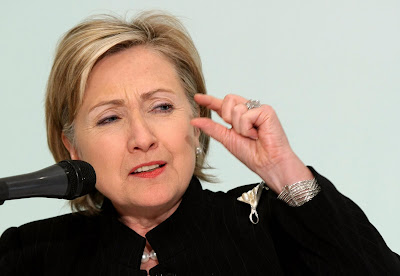 RED WARNING TO THE WORLD! This is rather Alarming!

A mass outbreak of disease caused by biological weapons could cripple the global economy, U.S. Secretary of State Hillary Clinton warned Wednesday, calling for greater international efforts to prevent terrorists from getting and using such devices.

"We view the risk of a bioweapons attack as both a serious national security challenge and a foreign policy priority," Clinton said at the 7th Review Conference of the United Nations Biological Weapons Convention. "In an age when people and diseases cross borders with growing ease, bioweapons are a transnational threat. We can only protect against them with transnational action."

While advances in science and technology make it possible to prevent and cure more diseases, they also can make it easier for states and nonstate actors - including terrorists - to develop biological weapons, Clinton noted.

" A crude but effective terrorist weapon can be made using a small sample of any number of widely available pathogens, inexpensive equipment, and college-level chemistry and biology," she said.

More work must be done to prevent states and, more importantly, terrorists from acquiring biological weapons, Clinton told the conference.

Efforts by terrorists to acquire bioweapons are growing, she said, citing evidence found by NATO forces in Afghanistan in 2001 that al Qaeda was seeking the ability to conduct bioweapons attacks, as well as a call to arms last year by al Qaeda in the Arabian Peninsula for "brothers with degrees in microbiology or chemistry ... to develop a weapon of mass destruction."

She called for renewed efforts to prevent outbreaks and attacks and develop responses for when they do occur, pointing to the 2001 anthrax attacks in the United States that killed five people and forced more than 10,000 people to be put on antibiotics.

In an era of globalization, Clinton noted, a victim of an attack or someone suffering from a disease like the H1N1 swine flu could easily travel and spread the illness worldwide, causing a mass outbreak that could cripple an already fragile global economy by cutting off the movement of people and goods and sparking food shortages.

Clinton also called for increased reporting and transparency by countries to guard against the misuse of biological materials, as well as improved international coordination and strengthening public health systems to detect and respond to outbreaks.

"We must come together to prevent, and detect, and fight every kind of biological danger - whether it's a pandemic like H1N1, or a terrorist threat, or a treatable disease," she said.
The United States also wants to find ways to maximize the benefits of scientific research while minimizing the risks, Clinton said.

For example, she said genetic research shows great promise but could also potentially be used to assemble the components of a deadly organism.