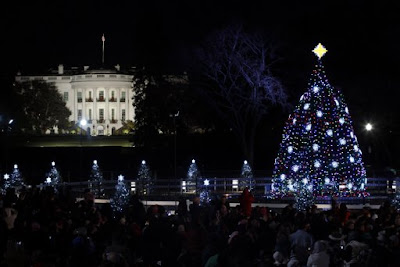 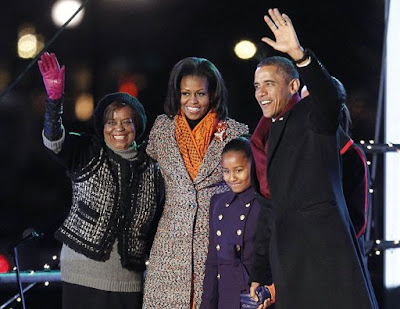 WASHINGTON (AP) — The new National Christmas Tree is settling into its new digs just south of the White House. President Barack Obama and his family officially marked the start of the Christmas season by lighting the tree in a ceremony just after dark Thursday.

The 26-foot Colorado blue spruce was planted in March on the Ellipse, a park that lies between the White House and the National Mall. Strong winds in February toppled the previous tree, which stood in the park since 1978. In remarks delivered during the tree-lighting ceremony, Obama urged the crowd to be generous and to help others in need during the holidays.
"In this season of hope, let's help those who need it most: the homeless, the hungry, the sick and shut-in," he said. "In this season of plenty, let's reach out to those who struggle to find work or provide for their families."

Obama welcomed troops returning home in time for the holiday, and asked Americans to express their gratitude to service members. "In this season of generosity, let's give thanks and honor to our troops and our veterans and their families who've sacrificed so much for us," he said. Obama was joined at the ceremony by his wife, Michelle; daughters Sasha and Malia; and mother-in-law Marian Robinson. The first lady read Clement Clarke Moore's poem "A Visit from St. Nicholas" with Muppet star Kermit the Frog.