Al-Assad lies in Fear Of Possible Libyan Form Of Uprising 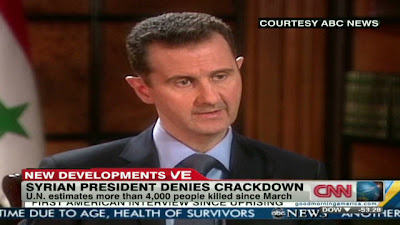 It is You who killed your own people and You are nothing but a Barbaric Dictator! You deserve to be put down like a sick dog!

(CNN) -- In a rare interview with an American television network, Syria's embattled President Bashar al-Assad denied he is responsible for the violence engulfing his country and distanced himself from the behavior of his armed forces.

"They are not my forces," al-Assad told ABC's Barbara Walters in an interview that was broadcast Wednesday. He was responding to a question about whether he thought his forces had cracked down too hard on protesters over the past nine months.

Wouldn't al-Assad, the commander in chief, have had to give the order for any military actions? "No, no no," he said.

Not by your command? "No," he said, "on no one's command. There was no command to kill or to be brutal."