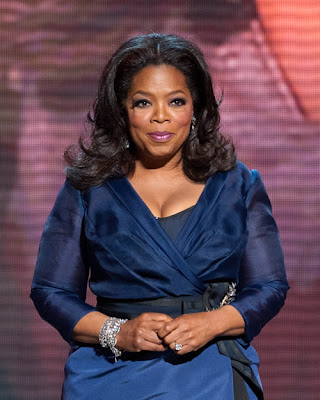 Congratulations Madame!
Actress and producer Oprah Winfrey, who has dominated the US television talk show scene for a quarter-century, was honored with an Oscar statuette late Saturday for her outstanding humanitarian work.
The 57-year-old television megastar -- nominated for a best supporting actress Oscar 25 years ago for her role in "The Color Purple" -- received the Jean Hersholt Humanitarian Award at a dinner here.
The award has been given out intermittently by the Academy of Motion Picture Arts and Sciences since 1956. Previous recipients include Bob Hope, Gregory Peck, Audrey Hepburn, Elizabeth Taylor, Paul Newman and Jerry Lewis.
"I never imagined myself receiving an Oscar, especially for what I'm considering my calling," Winfrey said, visibly moved.
She said she could not imagine that someone who was born in 1954 in the small town of Kosciusko in rural Mississippi state could ever receive an Oscar.
Her grandmother used to tell her that she hoped she would find "some good white folks" to work for in the future, Winfrey recalled.
"Nobody could ever imagine that it would be possible that you could be anything other than a maid, who had some good white folks who would give her clothes and let her take food home for the holiday," she said. "It's unimaginable that I would be standing before you tonight."
Now Winfrey is one of the richest women in the United States, with Forbes magazine estimating her net worth at $2.4 billion (1.7 billion euros) in 2010.
In May, Winfrey pulled the curtain down on her wildly popular talk show -- seen by an estimated 40 million Americans each week -- after 25 years on the air. Winfrey co-founded the women's cable television network Oxygen. She is also the president of media company Harpo Productions.
Last January, she launched in partnership with Discovery Communications a new television channel called Oprah Winfrey Network.
At Saturday's ceremony, the Academy also honored actor James Earl Jones, 80, and the legendary makeup artist Dick Smith, 89.
The first, known for having given his voice to Darth Vader in "Star Wars," was in London and received his Oscar on the stage of the Wyndhams Theatre.
The second received his honorary Oscar in tears. Smith is known for his makeup work in "The Exorcist," "The Godfather," "Taxi Driver" and "Amadeus," for which he received an Oscar in 1985.
The event was not televised, but segments of its video recording were expected to be shown at the 84th Academy Awards be held on February 26 at the Kodak Theater here.
Posted by Joshua Lopez at 2:57 AM