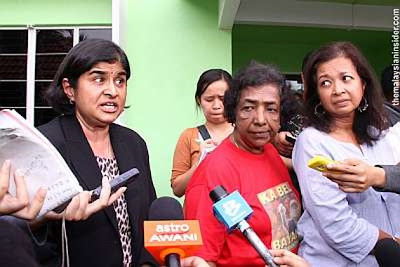 May The Good Lord Of Justice Prevail Over All These Evil Doers who reign and hide behind the veil of Religion!

KUALA LUMPUR: Bersih 2.0 chairman Datuk Ambiga Sreenevasan has threatened to sue TV3 if it does not retract its labelling of the annual sexual rights Seksualiti Merdeka festival as pesta seks bebas (free sex festival).
Ambiga, a former Bar Council president, said the media was unfair in misleading the public on the true nature of the event and has demanded they correct their description of the event.
Sexualiti Merdeka 2011, scheduled for tomorrow at the Annexe Gallery at Kuala Lumpur Central market, has been halted after police declared it unlawful.
"It has been played up in a terrible manner. The way TV3 reported it, they are basically lying to the public about what Seksualiti Merdeka is all about," Ambiga said. "If they do not correct it, they will be hearing from our lawyers."
Speaking at the Tenaganita headquarters in Jalan Gasing where she and others met with Brickfields police to assist in police investigation into the event, she added: “The way certain media reported this event will only make the situation worse for the same people we are trying to protect. "
"With the event falsely portrayed as pesta seks bebas, it only makes people discriminate against this group even more."
Seksualiti Medeka is an annual sexual rights festival organised by a loose coalition of non-governmental organisations (NGOs).
Ambiga also asked how Malaysia could provide a roof for refugees from Australia "when we don't give fellow Malaysians the same treatment as everyone".
She was referring to Malaysia having the right to veto any asylum-seekers to Australia wishing to relocate there under the terms of the refugee agreement signed by both countries in Kuala Lumpur.
Datuk Paduka Marina Mahathir also criticised media reports describing Seksualiti Merdeka as a “free sex festival" and threatened to sue if the matter was not clarified.
Marina turned up at the Tenaganita headquarters to lend support for the four human rights activists who were being questioned by police over their involvement in the festival.
Those questioned were Ambiga, Seksualiti Merdeka co-founder Pang Khee Teik, Tenaganita president Irene Fernandez and Bersih 2.0 steering committee member Maria Chin Abdullah.
“I am shocked and angry at hearing the event being described as such on TV3 last night,” said Marina, who reminded journalists to report things "as it is and not to sensationalise an issue".
She said the event was not to promote free sex but to help the marginalised lesbian, gay, bisexual and transgender (LGBT) community to understand their legal rights.
“It's simply an event to explain and educate them of their rights within the law,” she said.
The theme of this year's Seksualiti Merdeka festival is "Queer Without Fear".
Co-founder: We will explain to IGP, SEKSUALITI Merdeka campaign co-founder Pang Khee Teik is more than willing to meet with Inspector General of Police (IGP) Tan Sri Ismail Omar to address issues pertaining to the campaign.
He said the organisers wrote a letter to thank the IGP for expressing his interest in hearing about the matter. “We wrote to the IGP today (Monday) to thank him as he has agreed to meet with us. We have also offered several dates, which are Tuesday, Wednesday and Thursday this week."
The letter was passed to officers from the Brickfields police headquarters who were at the Tenaganita headquarters in Jalan Gasing to record statements by Pang, Bersih 2.0 chairman Datuk Ambiga Sreenevasan, Tenaganita president Irene Fernandez and Bersih 2.0 steering committee member Maria Chin Abdullah.
Asked what would be discussed at the meeting with the IGP, Pang said they would convey the real objectiveof Seksualiti Merdeka and also the activities they had organised.
“We want to explain that we are not planning to demonstrate and neither are we against the police. We hope to work with the police and give them our cooperation,” he said. “We hope the meeting with the IGP will take place as it will be a good opportunity to explain the real objectives of this event.”