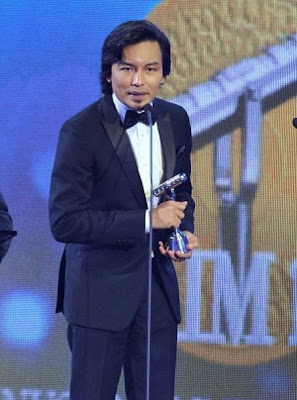 I must say that this song 'Sedetik Lebih' is so deeply meaningful coupled with brilliant delivery by Anuar Zain, i can repeatedly hear this song and not get bored of it & i'm a person who is not a fan of Malay Songs.

I must say that Anuar Zain & Dato'Sheila Majid have captured the hearts of many non Malay music lovers, they have lived above being comfortable in the Malay Arena and to begin with, they have what it takes to capture markets that are not reachable by most Malay singers.
On Najwa Muhyiddin's awards, i hope she has gotten where she is due to hard work and real talent, not overnight fame due to the fact that she is the daughter of Malaysia's Deputy Prime Minister. I was told that many doors opened to her because of who she is, if it's true, then i say it's not at all right. We are not living in a feudalistic era!

On the mishap in this year's awards which saw Yuna having to return her award and then the award going to Anuar Zain & Edry, Ernst & Young should have been informed on the criteria and requirements. Seems to me they were rather unclear.

KUALA LUMPUR: Technical fault robbed singer-songwriter Yuna of her award.
Having won the coveted Song of the Year award for this years’s 18th Anugerah Industri Muzik (AIM 18), she had to return the trophy and prize due to a “misinterpretation of the awards criteria” by the appointed external auditors for the AIM18 judging process, Ernst & Young.

The winner is now Sedetik lebih, composed by Edry Abdul Halim and performed by Anuar Zain.
In a Press release issued by the AIM 18 organiser Recording Industry Association of Malaysia (RIM) organising committee co-chairman, Rosmin Hashim said: “We would like to record our sincere apologies for any difficulties that may have been caused.”
He expressed RIM’s gratitude to all the parties involved for their cooperation in ensuring that the integrity of the AIM awards is preserved. Penakut, one of the 20 songs nominated for the coveted Song of the Year, was selected by jury members who were not involved in selecting the winners for the four award categories namely Best Pop Song, Best Rock Song, Best Ethnic Pop Song and Best Nasyid Song..
One of the criteria set by RIM for Song of the Year is that it must be a winner from one of the four award categories. Since 'Sedetik Lebih' won best pop song, it should technically win Song of the Year.
Yuna won the Best Vocal Performance in A Song (Female) Award as well as the special Anugerah Kembara in recognition of her achievements for promoting Malaysian compositions in the international arena.
“Though this is not something expected, I appreciate that the AIM organisers are trying to do what is right. It is a legitimate expectation of all award winners to be treated fairly and I would like to extend my heartiest congratulations to Anuar Zain and Edry Abdul Halim,” she said about the award retraction.
Anuar Zain (who also won the Best Vocal Performance in A Song - Male) is thankful for the win.
Composer Edry, who shares the award, said: “We are very proud of Yuna and what she has achieved both locally and abroad. As a fellow performer and songwriter, we would like to emphasise that no one should take any credit away from her. We would also like to express our appreciation for this Song of the Year Award.”
Rosmin said RIM is very proud of what Yuna has accomplished and “will definitely continue to support her and all others in the music industry.”
RIM will be organising an open AIM forum at 3pm on Dec 6 at the Royale Chulan Kuala Lumpur Hotel for members of the music industry and the media to provide comments and feedback on AIM with a view to improvements moving forward.