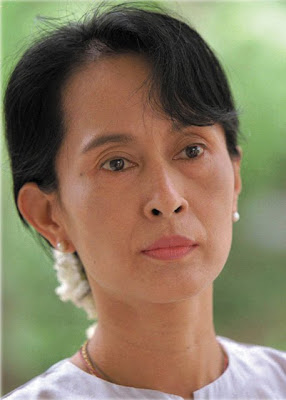 This Is Fantastic News! Let Justice & Democracy In It's Fullest Extent Reign Supreme!

YANGON: Myanmar democracy leader Aung San Suu Kyi will run in a parliamentary by-election expected by the end of the year, a top party official said on Monday, three days after her popular movement ended its boycott of the country's political system.
It will be the first time the Nobel Peace Prize laureate contests a seat herself having not stood as a candidate in her National League for Democracy's (NLD) 1990 election landslide, which was ignored by the then military regime and led to her lengthy incarceration.
"Aung San Suu Kyi intends to stand for the by-election but it's a bit early to say from which constituency she will run," Nyan Win, a member of the NLD's executive committee, told Reuters.
There are 48 seats available in Myanmar's new senate and lower house, which will be contested in polls expected by the end of the year.
The NLD was officially dissolved by the military junta for refusing to take part in last year's parliamentary polls because of "unfair and unjust" laws that would have prevented hundreds of its members from becoming lawmakers.
The legislature convened in February and is Myanmar's first since the late 1980s, when a unicameral "People's Assembly" controlled by the military's Burma Socialist Programme Party was scrapped.
Suu Kyi is the daughter of late independence hero Aung San and was a staunch opponent of the military during its 49 years of totalitarian rule.
However, she has shown willingness to work with the new civilian government approved by parliament in March, even though it is run by former junta generals.
On Friday, the NLD voted unanimously to register the party and re-enter the political fray following an amendment to the constitution allowing those who have served sentences for crimes to take part in elections. Many NLD members, including Suu Kyi, are current or former political prisoners.
Since the annulled 1990 polls, Suu Kyi, 66, has spent most of the time in detention. She was released a year ago and still chooses to live in the lakeside house that on and off was her prison for 15 years. She had earlier given no indication she herself was interested in becoming a lawmaker.
Her decision comes after Myanmar won a powerful endorsement on Friday, with U.S. President Barack Obama announcing Secretary of State Hillary Clinton would visit the resource-rich country neighbouring China, citing "flickers of progress".
Clinton will be the highest-ranking American to visit Myanmar since a 1962 military coup. She will go to Myanmar for two days early next month and plans to meet Suu Kyi.
Clinton has said credible elections are one condition for ending U.S. sanctions, along with the release of more political prisoners and peace with ethnic minorities. Myanmar released 230 political prisoners last month and another amnesty is expected in the coming weeks and months. The NLD, Myanmar's biggest opposition force, would have dominated parliament had the 1990 result been accepted by the junta.
The regime annulled the 1990 result only last year, arguing that the NLD's win could not be recognised because it was in breach of a constitution drafted 18 years later.
Suu Kyi commands considerable influence over the party and Ko Ko Hlaing, a senior advisor to President Thein Sein, said on the sidelines of the Association of South East Asian Nations (ASEAN) summit in Bali last week that the NLD's decision to re-register was a "significant step". The presence of Suu Kyi in parliament would be another dramatic sign of openness that could give more legitimacy to the retired generals in control of the country, who are seeking acceptance, engagement, support and investment from the international community. Part of its plan was to expedite that process by lobbying to chair ASEAN in 2014, two years ahead of schedule.
The new government has started dialogue with Suu Kyi, moves welcomed by the West, which has imposed sanctions on the country because of its poor human rights record.
http://thestar.com.my/news/story.asp?file=/2011/11/21/reutersworld/20111121131542&sec=reutersworld
Posted by Joshua Lopez at 2:18 PM