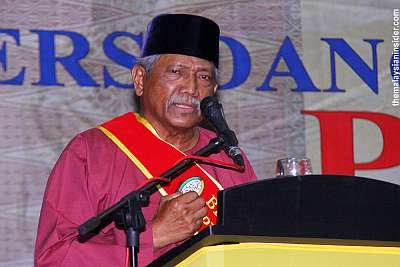 A Face Of One Of Malaysia's Greatest Nightmare!

The worst game that could have ever been done is giving publicity to Tan Sri Rahim Noor. The country hasn't healed from his bloody reckless leadership as Inspector General Of Police (IGP),

He reigned in his position as an absolute dictator, people do not want to hear his name anymore, infact many believe that his time in prison was too short!

Here is comes out on stage of Perkasa without any shame, a face of Gangsterism & Dictatorship! His appearance yesterday has pulled UMNO further behind!

PM Najib must take fuller and better control on avoiding such incidents because it can further damage UMNO & BN & irritate the people further!

By The Federal Constitution, the Police, be they in power or retired, should remain apolitical just as the Monarchy & Courts.

DAP national publicity chief Tony Pua today flayed former inspector-general of police Abdul Rahim Mohd Noor for suggesting that the human rights movement was akin to communism. "If human rights can be akin to communism, then surely what Rahim is attempting to do during his speech at the 2nd Perkasa general assembly is to seed and grow the fascism movement in Malaysia," Pua said in a press statement today.

Rahim had on Wednesday urged Malays to unite as they did against the "communist wave" because the latest "human rights wave" would undermine the country's social contract. Pua said this was consistent with the definition of fascism, which is described by the Oxford English dictionary as "a belief in the supremacy of one national or ethnic group, a contempt for democracy, an insistence on obedience to a powerful leader, and a strong demagogic approach".
‘Rahim subverting Najib's reforms'

"Rahim's speech and reception at the right-wing Perkasa assembly marks the second time the movement is attempting to derail reforms put forth by the Prime Minister (Najib Abdul Razak)," Pua said.

Najib had, on the eve of Malaysia Day, announced several reforms to allow more space for human rights, including the abolition of the draconian Internal Security Act and several Emergency era laws.

Another instance of this, Pua said, was when Perkasa forced the prime minister to reverse his landmark New Economic Model, which sought to reform the country's race-based affirmative action system.

He said Najib "must immediately put a stop to this fascism movement" and openly condemn the former IGP and Perkasa's attempt to allude the human rights movement to communism. Pua, who is also Petaling Jaya Utara MP, added that Najib must also declare his full support for human rights if he was sincere about political reforms.

Otherwise, the latest hype surrounding the "political transformation programme" would just become a "trial balloon", like the NEM, where the promised reforms would be severely curtailed or worse, equally draconian laws would be adopted to replace existing ones such as the ISA.
‘Mahathir, Rahim have no credibility’

“Anyone standing with the people in the democratic struggle would have to be in direct opposition against the cruelty they espouse. In this regard, the DAP is unashamed of our track record and our stand is that human rights should form the base of our nation’s politics.” Chow also slammed former prime minister Dr Mahathir Mohamad for backing Rahim’s statement, stating that both men had no credibility to comment on human rights issues. “One was a top police officer who violently assaulted a detainee who was handcuffed and defenceless. The other destroyed democratic institutions of the state and silenced political opponents by locking them away. "Further, both are now openly in support of an organisation advocating racial supremacy,” he added.