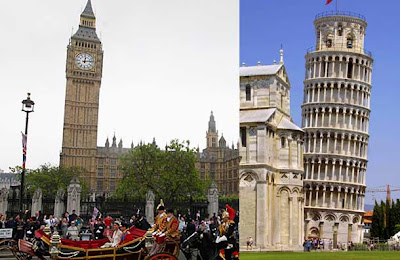 This is the end result of negligence but the good news is there are many ways in today's modern structural technology that can rectify this problem.

BIG Ben is turning into our own Leaning Tower of Pisa, a worrying survey has confirmed.
The much-loved landmark’s tilt has become so pronounced it is noticed by passers-by and tourists.
The Palace of Westminster’s clock tower has not been perfectly vertical for years because of shifting ground conditions and tunnelling for Tube lines.

Now engineers say it will one day topple over if the lean is left unchecked. Big Ben is the nickname of the tower’s largest bell but the public generally use it as the name of the whole clock, built in 1853.
The peak of the 315ft tower is 18 inches off where it would be if vertical – a 0.26 degree tilt to the north west.
That is one sixteenth of the Pisa tower’s lean. But a survey for London Underground and the Parliamentary Estates Department found the rate of movement accelerated in recent years.
It has caused cracks to appear in walls inside the House of Commons.
Prof John Burland, of Imperial College London, said: “I have heard tourists saying, ‘I don’t think it is really vertical’. They are quite right. The tilt is now just about visible. If it started greater acceleration we would have to do ­something in a few years.”
The clock moved an eighth of an inch from the perpendicular between November 2002 and August 2003. Since then the tilt has increased 0.04 of a degree each year. At that rate it would crash into Portcullis House, used as MPs’ offices – in 5,000 years.