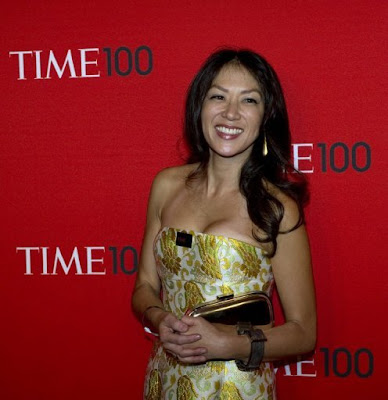 US "Tiger Mom" Amy Chua Thursday urged strict Asian parents to relax and give their children more freedom but also to avoid the "romanticised" Western focus on creativity over hard work.
The Chinese-American law professor at Yale University sparked international controversy this year with her book "Battle Hymn of the Tiger Mother", which detailed the strict parenting regime she put in place for her children and called this approach the key to success.
"I think Western parents give kids too much freedom, too much choice at a young age... Asian parents like in Korea have opposite problems, giving too little freedom, too little choice for our kids," Chua said in a speech at a Seoul forum.
She stressed that Asian parents often put too much focus on children's academic excellence while failing to foster social skills and "emotional intelligence".
"As we head into the 21st century and global competition gets intense, simply emphasising hard work and memorising and long hours is not going to be enough," she said, urging a balance between the different parenting philosophies.
Chua criticised US parents and schools for deferring "too quickly to their young kids' choices", but at the same time called on Asian parents at the other extreme to let go once their kids become old enough.
"To me this type of parenting should be when kids are very young. I think it actually should start to end when they are around 11, 12, or 13," said Chua, adding she mistakenly "went too far with it" with her daughters.
Chua earlier met with a hailstorm of criticism, including death threats, after excerpts of her book were published in the Wall Street Journal -- a response which she said turned her life upside down.
In the book, she allows nothing less than top school marks from her two daughters, no sleepovers or watching television, and makes them do mandatory piano or violin study.
Chua defended many of the parenting methods described in her book, saying US parents mistakenly prioritise a "romanticised notion of creativity" over the hard work and discipline that is the basis for such creativity.
She said her younger daughter, who six years ago hated maths after failing a test, now cites it as her favourite subject after long hours of study involving a stopwatch led her to excel.
"It's our job to prepare them for the future...there's something very joyful and fulfilling about doing something extremely well," she told the World Knowledge Forum hosted by Maeil Business Newspaper.
Chua blamed America's "fear of Asia" for the heated response to her book, which she said was written as a family satire.
"I think...the book tapped into America's deepest anxiety. One is fear of parenting and the second is Asia rising with the US declining," said Chua.