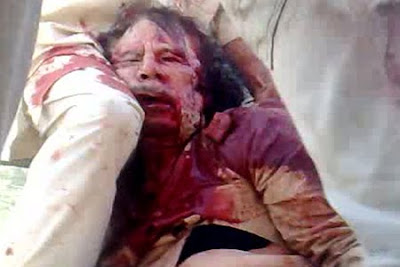 This is the image that confirms Muammar Gaddafi is dead, according to Libyan rebels.
Covered in blood and slumped against a rebel fighter, the deposed leader was reportedly attacked as he hid in a hole shouting "don't shoot, don't shoot".

He was shot in both legs and in the head, according to reports. Mahmoud Jibril, the interim prime minister, confirmed Gaddafi's death. He told a news conference in Tripoli: "We have been waiting for this moment for a long time. Muammar Gaddafi has been killed."

Luke 14:11 BBE Bible in Basic English. For every man who gives himself a high place will be put down, but he who takes a low place will be lifted up.

Luke 14:11 GNT Good News Translation. For those who make themselves great will be humbled, and those who humble themselves will be made great."

Luke 14:11 MSG. The Message What I'm saying is, "If you walk around with your nose in the air, you're going to end up flat on your face. But if you're content to be simply yourself, you will become more than yourself."