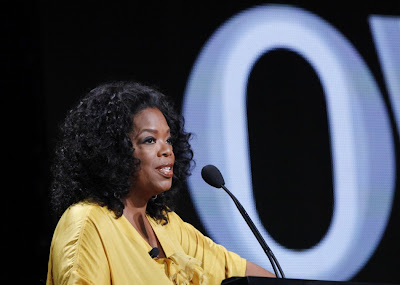 Oprah Winfrey Highest Paid Woman Entertainer, Tops Forbes List. Forbes has released its annual list of the highest paid women in the entertainment industry.
Oprah Winfrey, the former queen of daytime talk tops the list of Hollywood’s highest earning women with $290 million in earnings between May 2010 and May 2011. Winfrey tops the list for the second time keeping the title of the world’s top woman earner.
With an estimated worth of $2.7 billion, Winfrey is at the 139th position on list of the 400 richest people in America.
Winfrey is followed by Lady Gaga at the second rank on the list with $90 million which is $200 million less than Winfrey earned last year and Bethenny Frankel with $55 million, according to Forbes.com.
Supermodel Gisele Bundchen, Taylor Swift, Ellen DeGeneres and Judge Judy Sheindlin are in a four-way tie for fourth place with $45 million each.
American singer and actress Katy Perry is at the eight positions with $44 million and Beyonce Knowles or Beyonce is at the ninth positions with $35 million.
Rounding off the list, Danielle Steel, the romantic novelist, is in tenth, with fractionally less then $35 million.
According to the report on Forbes.com, the organization spoke to lawyers, agents, producers and other people "in-the-know", to compile the necessary information. Check out the slideshow to catch a glimpse of all ten women.
Posted by Joshua Lopez at 6:00 AM