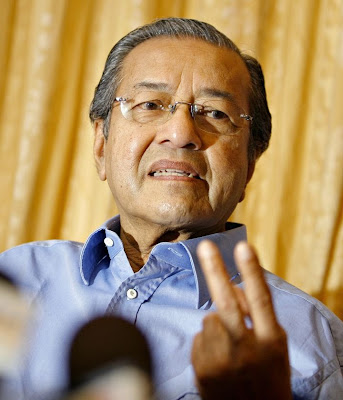 Tun Dr Mahathir Mohamad returned to familiar topics today, warning against hudud laws, feudalism and calls for unity among Malays as it would lead to confrontation with other ethnic groups.

Malaysia’s longest-serving prime minister said such parochialism was unnecessary in the country which he dragged from an agragrian society into an industrialised and services economy.

“What if you unite the Malays? What will the Chinese do? You unite the Chinese. What will the Indians do? They turn to Hindraf? They will fight each other. I think we are united enough,” Dr Mahathir replied to questions after delivering a lecture at the Perdana Leadership Foundation.
To another question from the Malay non-governmental organisation on the need for hudud or Islamic criminal laws, the veteran politician said there should not be too many disputes on religious matters, but that Hudud law “is disputed.”

“People think that the most important part of it is the process of accusing and judgment. But Quran has 43 verses in regards with justice but this was not discussed in depth,” he said, adding there was a lack of understanding regarding hudud.

He cited the example of two people found guilty of stealing – one non-Muslim Chinese and one is Muslim Malay.

“Would you cut off the Malay’s hand and give a two-month jail sentence to the Chinese? If it is not justice, then it is not Islamic.”

The former prime minister also cited the issue of rape victims having to produce four witnesses with good characters in order to make an accusation.

“But how could the four become the witnesses if they did not do anything when the rapist raped her? I’d say, why are they not helping her instead?” Dr Mahathir said.

“If the victim could not produce the four witnesses, the rapist could get away and she would be whipped for making false accusations,” he said, adding it was hard to find four witnesses with good character.

He noted that some people are calling for a return to feudalism but he called it a mistake,
“We cannot have a feudal system in this country where people have no say (in government). If we have a feudal system, it is likely the Rulers will surrender this land to others again,” Dr Mahatihr said, referring to his remarks made earlier in his lecture that the Malay rulers willingly signed treaties with the British, effectively becoming colonised.