Archbishop Of Canterbury Slams Robert Mugabe, short of calling the President a Barbarian! 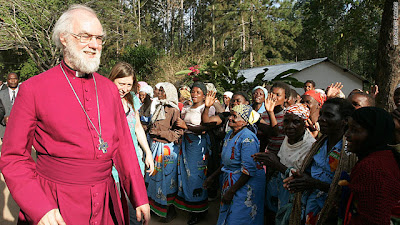 Mugabe is an Absolute Barbarian who places homosexuality as a means of avoiding The Archbishop Of Canterbury's utter disappointment in his barbaric leadership coupled with corruption of the highest order under a bloody regime!

By Nick Spencer, Special to CNN

(CNN)–Striding across the world stage and challenging dictatorial regimes, he cuts an unlikely figure. But Monday the archbishop of Canterbury, Rowan Williams, met with Zimbabwean President Robert Mugabe.

The agenda was not published, but it seems clear that the discussion was likely heated.
In Zimbabwe, nothing is sacred in the power contest – state, economy, land nor church.

In a sermon delivered in Harare national stadium on Sunday, Williams alluded to the “injustice and arrogance” of the actions of those whom he said St. Paul would call “false brethren."

This barely coded reference to former bishop of Harare and Mugabe partisan Nolbert Kunonga – while not a direct challenge – can’t fail to be interpreted as a critique of the regime.

The Anglican flock on the ground is oppressed not only by Mugabe’s thugs but also now by the breakaway bishop, whose loyalty to the president has allowed him to seize church property and expel clerics.

And so, late though it may be, Williams has spoken with a clarity that Western politicians have lacked, south of the Sahara at least. It is more than two years since opposition leader Morgan Tsvangirai’s appointment as prime minister in a "unity government."

This was always a dangerous and complicated compromise, and since 2009 the news cycle has not been able to accommodate the ambiguous narrative which is the ongoing struggle against Mugabe’s oppression. We lack the attention span for such complexity, preferring the (to our eyes at least) hot, bright and quick burn of revolutions like the Arab Spring.

When shaping foreign policy, British governments are usually motivated by a mix of genuine liberal idealism, public opinion and – as is the case in Libya – the need for secure oil reserves.
Williams’ interests in Zimbabwe are driven by his flock’s needs, and so the visit is rightly pitched as pastoral, not political.

In that way, it evokes memories of one of John Paul II’s earliest pastoral trips, in June 1979, to Poland, at the time laboring under a deeply unpopular, oppressive Communist Party. His visit was greeted with wild enthusiasm, worried the authorities, stiffened resistance, and helped galvanize the Solidarity movement – so much for "pastoral."

He doesn’t have the latter’s legendary charisma, his church is nowhere near as global in its presence, and he doesn’t in speak with the authority that comes from having endured the oppression which he opposes. Kunonga – and to some extent Mugabe himself – has done his best to muddy the water, calling Williams a civil servant representing neocolonialism and suggesting he comes to "lobby for homosexuality."

Here that sounds weak, but the gambit is to erode the moral authority with which Williams speaks. It’s difficult to know what effect that has on the ground.

Nevertheless, his presence, so celebrated by Anglicans, carries a fragment of hope for many who are suffering in Zimbabwe. And it is just possible that by underlining the atrocious pastoral cost of Mugabe’s rule, to the world and to the president himself, the archbishop may open up some fissures in the regime.