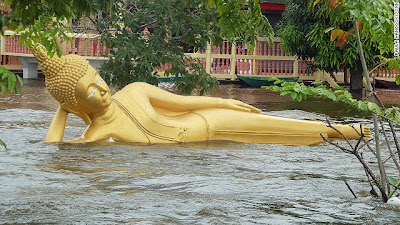 (CNN) -- Thailand's devastating floodwaters are draining southward towards Bangkok Friday, and residents have been told to prepare for the worst when the spring high tide and a huge volume of water flowing down the Chao Phraya River merge over the next couple of days.
Workers in the city are rushing to shore up barriers and warnings have been posted for the northern suburbs.
"Between seven and eight billion cubic meters of water a day is being released from the Bhumibol Dam in the north of the country, which is heavily affecting provinces like Nahkon Sawan and Ayutthaya," government official Wim Rungwattanajinda told CNN.
"From that, about one to 1.2 billion cubic meters of water is reaching Bangkok every day."
So far, 283 people have been killed and two people are missing in Thailand, according to the government website Thaiflood.com. Some 61 of the country's 76 provinces have so far been affected, impacting more than eight million people.
More than 500,000 square kilometers -- an area the size of Spain -- are affected by the floods in Thailand, Cambodia, Vietnam and Laos, according to CNN meteorologist Jenny Harrison.