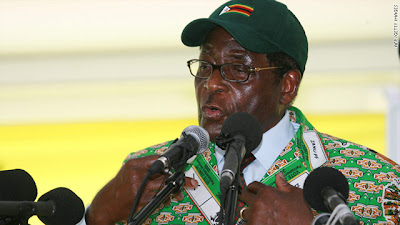 Well, if doesn't have Cancer, then just put him down! He deserves to be put down like a sick dog! Period.
(CNN) -- President Robert Mugabe's Zanu PF party dismissed Monday a "confidential" cable released by WikiLeaks that claims the Zimbabwean leader has cancer.
WikiLeaks claimed Friday that Reserve Bank of Zimbabwe Governor Gideon Gono had told the former U.S. ambassador Christopher Dell during a private meeting in 2006 that Mugabe had prostate cancer that had spread to other organs.
"If he was that ill (in 2006), how come he is still going strong? I have seen him for a long time and even last week, he has no health problems. There is a lot of things that are not true in that," said Rugare Gumbo, Zanu PF spokesperson, referring to the WikiLeaks cable.
The cables claimed that Grace, Mugabe's wife, had told Gono that the 87-year-old was "out of it about 75% of the time."
"The governor (Gono) confided that Mugabe appeared to be deteriorating mentally and losing his capacity to balance factional interests," Dell wrote in his report after meeting Gono who has repeatedly denied claims of having an affair with Grace. "She (Grace) wanted him (Mugabe) to step down."
Gono did not answer several calls made to him by CNN.
Posted by Joshua Lopez at 2:31 PM