HIV could be turned into a minor infection 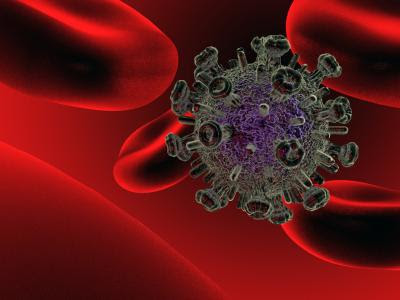 A vaccine tested in a clinical trial has the potential to turn HIV into a 'minor chronic infection,' similar to herpes, scientists claim.
Ninety per cent of healthy volunteers given the MVA-B vaccine developed an immune response to HIV in phase I clinical trials.
"MVA-B vaccine has proven to be as powerful as any other vaccine currently being studied, or even more," said Professor Mariano Esteban, at the National Biotech Centre in Madrid, where the vaccine was developed.
The vaccine consists of a harmless virus - vaccinia - which has been genetically altered to carry four HIV genes, to try to stimulate a specific immune response against HIV.
Some 30 healthy volunteers took part in the trial, 24 of whom received the MVA-B vaccine, while 6 were given a placebo. All study participants were given the vaccine at the beginning of the trial and after four and 16 weeks.
After 48 weeks, immunological tests on the volunteers' blood showed that around ninety per cent of the volunteers given the vaccine developed some type of immune response. The vaccine stimulated both T and B cells.
Both T and B cells are types of white blood cells; T cells seek out and destroy other infected cells, while B cells attack invading microbes by producing antibodies.
Some types of T cells act as the 'brains' of the immune system and help organise the immune response against invaders. Other T cells are long-lived and form an immunological 'memory,' so the immune response can rapidly respond to re-infection.
Nearly three-quarters of the volunteers developed HIV specific antibodies after 48 weeks. The vaccine also triggered up to 15 different types of T cells, including memory T cells, according to the research team.
The success of the vaccine at triggering the immune response led the researchers to suggest that the MVA-B could be used as a therapeutic vaccine.
Normally vaccines are designed to prevent someone from being infected with a disease. Therapeutic vaccines are used to treat people with the disease by boosting the immune response, controlling the infection rather than eradicating it.
The next step would be to test the vaccine on people already infected with the virus, the researchers said.
Professor Esteban said: "MVA-B is not capable of removing the virus from the body as once a cell is infected, virus' genetic data is integrated and replicated with the cell."
But in a vaccinated person, "if the virus enters the body and tries to develop in a cell, the immune system is ready to inactivate the virus and destroy the infected cell."
"If this genetic cocktail passes Phase II and Phase III future clinic trials, and makes it into production, in the future HIV could be compared to herpes virus nowadays."