Dr.Mahathir Mohamad is a liability to PM Najib Tun Razak 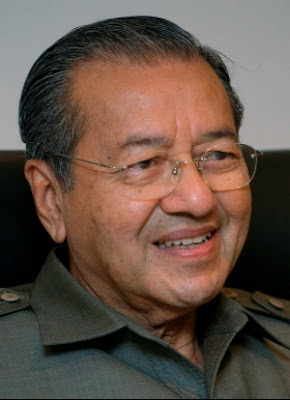 As much as i Love You, As much as i would cry and mourn at your passing, i firmly believe that you should stay out from politics and make way for PM Najib Razak & The New Democracy that we are crying out for. So just shut the fuck up Dr.Mahathir, your time is over!
KUALA LUMPUR: It will be all right if the general election is held a little later to give time for Prime Minister Datuk Seri Najib Razak to make an accurate assessment on the choice of candidates.
Former prime minister Tun Dr Mahathir Mohamad said if a hasty decision was made in choosing the candidates, there was the possibility of inaccurate choices resulting in the fielding of unsuitable candidates.He said Najib also needed to resolve the problem where certain divisional leaders, if dropped, might work to undermine the success of the chosen candidates. "This could be a source of problem as choice of candidates is based on the prime minister's assessment, assisted by his advisers," he said.
"This could cause misunderstanding among leaders at the divisions who feel they are qualified but have been sidelined."It has become a standard practice among such disgruntled leaders to ensure that the chosen candidate loses, just to prove that the choice of candidate was wrong."
Dr Mahathir was speaking at a public forum televised over RTM1 on Friday.He said Najib needed to explain to potential candidates that if they failed to support those chosen over them, they would face the same situation if they themselves were chosen. So, they should ensure that the party wins as this will give all quarters a chance to continue serving the people and receive benefits.

Asked about BN's position now compared with the 2008 general election, Dr Mahathir said the present leadership had realised the mistakes that had led the party to its bad showing in 2008, and was making amends, although this was not an easy task."So far, BN under its present leadership has been winning back the support of the people. But in this respect, we must not be too confident of scoring a big win in the coming election," he said."At this stage, we could win but possibly not a big enough win, which will cause problems for the leadership."Asked to comment on the government's new transformation plans, Dr Mahathir said the plans were a good move but they needed time so that if the plans did not bring the desired results, they could be adjusted to be more focused to ensure economic growth.
Dr Mahathir said in ensuring economic growth, the government should stop depending on foreign investments considering that the foreign investors now had many choices other than Malaysia."We need to identify local investors and give them the same type of support accorded to foreign investors in the form of tax exemption and other assistance. "There are a lot of local investors well versed about world markets and have technological expertise in various industries."The government should change its mindset of the last 20 years that only foreign investors have big capital and technology."
Dr Mahathir said the government should also change its mindset in handling issues such as race polarisation, media censorship and social and political upheavals."While in the past, we could advise the media not to play up sensitive issues. However, it is unreasonable to do so now, with the emergence of the Internet and Facebook."The government should use logical means to explain to the people about sensitive issues and make them realise that in a multiracial country, an individual race cannot demand 100 per cent of what they feel are their rights. "Every race has to compromise to ensure the country's peace and harmony and continued growth, which will bring benefits to all."Dr Mahathir said in every race, there would be extremist groups who would make unnecessary demands and the government had to explain to the various races through the 1Malaysia concept, for instance, to come out and oppose the extremist groups within their respective races. Asked about the future of Sabah and Sarawak, Dr Mahathir said the two states had more wealth in terms of agricultural scope, land space and petroleum compared with the peninsula, adding that ultimately the two states would be contributing to the peninsula states, and not vice versa.He said: "When we were negotiating for Sabah and Sarawak to be included in Malaysia, the two states were lagging behind badly and we had to give them our assurance, hence the 20-point agreement was born."The agreement is nonexistent now as the situation in the two states have changed." Asked about the recent debate raised by the opposition parties seeking to glorify the communists over their role in fighting the British, Dr Mahathir said: "This is not right. Communists fought to drive out the British so that they could set up a dictatorship in Malaysia, which would have caused great suffering for the people. They had no qualms about terrorising and killing the people."
On the other hand, Tunku Abdul Rahman's struggle for independence was for the benefit of the people of all races." Dr Mahathir said the reason the opposition was glorifying the communists was to reduce support for Umno by demonising its leaders like Tunku Abdul Rahman, so that the party could not be proud of its struggle for independence.
Posted by Joshua Lopez at 7:00 PM