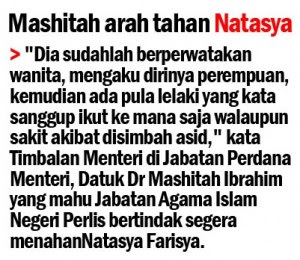 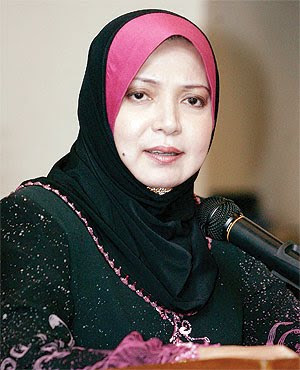 This female Malay deputy minister is a clear example of the draconianism that Malaysia faces. A politician who thinks thats it's her duty and the government's duty to moral police the same citizens who vote them into power. She has the nerve to blatantly ignore universal laws on human rights and civil liberties, She uses Islam as a Passport to justify her actions on calling for the arrest of a Transgender who lives with her boyfriend & she goes on further by mocking the Transgender without considering the fact that such a citizen with voting rights is entitled to live in Peace, Dignity & Respect.
Why do we need to arrest a Transgender who's living with her BF?! What in the world for?! How does this couple bring harm to anyone? This is a private matter of the individual and not the government's business and if the government is civilized enough they would realize this. What the government has proven time and time again is to jump into the band wagon of ultra draconian mindsets of certain circles of society that hold a passion in interfering and hurting others using Islam as their passport.
They fail to realize that over the years the growing sense of Islamisation has caused much irritation, anger and tension among the younger generation of Muslims and those who come from educated and exposed backgrounds. The tougher the religion becomes, the greater the sense of detach from the religion, unfortunately the government and her cohorts fail to recognize this simple fact. How long more do you want to push down religion in people's throats?! How long more do you want to Moral Police the same citizens who vote you into power?! How long more do you want to use Islamic Departments to issue religious arrest on your citizens?! Are you aware of the times we are living in?!
It's rather alarming that in this time and age we have such a draconian politician (who lost in the last General Elections) who serves as Deputy Minister in The Prime Minister's Department today.
I say she's an absoulte bigot who uses Islam to break into the privacy of others and cause torment, hurt and pain to others. She fails to realise that Malaysia is a member of the UN, hence Universal Laws of Human Rights & Civil Liberties must be adhered to and the fact that Malaysia did come to a mutual agreement during the Yoyakarta Principles Of Human Rights Convention that gurantees peace, respect, civil and human rights to Lesbian, Gays, Bisexuals & Transgenders. (LGBT) http://www.yogyakartaprinciples.org/
Posted by Joshua Lopez at 1:07 PM