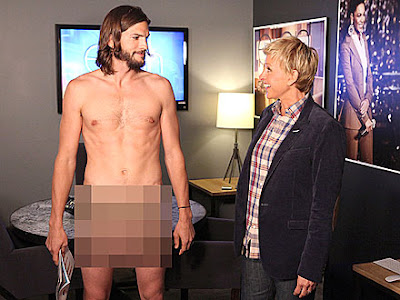 I'm in full support but please shave the beard and maybe trim the hair a little bit, too!

Ashton Kutcher can't seem to keep his clothes on. First the actor stripped down for a Two and a Half Men billboard –and now he's getting naked on The Ellen DeGeneres Show. In a segment taped for the Sept. 12 season premiere of the talk show, Kutcher addresses the ad for the sitcom, which features equally underdressed costars Jon Cryer and Angus Jones, along with the tagline, "All will be revealed."

"It's getting a lot of attention. So I just figured I’m going to do everything nude from now on," he tells DeGeneres and then drops his robe. "I don’t know if that’s a good idea. Really?" the host responds.
"Yeah. Whatever I’m doing I’m just going to do it nude," Kutcher jokes. "Let's do this. But to those who may be offended, worry not: Kutcher maintains his modesty thanks to computer pixilation.
http://www.people.com/people/article/0,,20526909,00.html?xid=rss-topheadlines&utm_source=feedburner&utm_medium=feed&utm_campaign=Feed%3A+people%2Fheadlines+%28PEOPLE.com%3A+Top+Headlines%29
Posted by Joshua Lopez at 11:29 AM