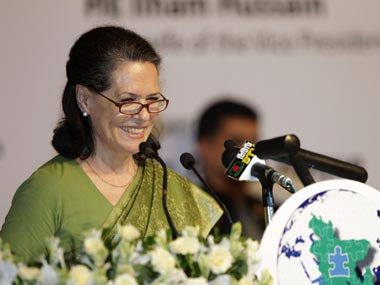 My Prayers Go Out To Her & I Wish Her Full Recovery. God Bless You Madame!

Aug. 30: Sonia Gandhi is to return tomorrow, bringing a sense of relief to Congress leaders and supporters worried at the recent mishandling of a political crisis and anxious about their party chief’s health about which they have been largely in the dark.

Sources said Sonia would return either tomorrow or in a few days, depending on the post-hurricane air travel situation in the US.

For reasons of privacy, the nature of the illness and the recovery trail were kept a secret till Priyanka Gandhi recently went public saying Sonia, who has had surgery in the US, was fine and set to resume her political responsibilities.

Rahul Gandhi’s supporters are relieved that the spotlight on the young general secretary would reduce, leaving him free to focus on next year’s Uttar Pradesh polls.

Party insiders said Rahul had made a conscious effort not to take charge despite his inclusion in a core group set up to run the party in Sonia’s absence. The efforts to scale down his role in the Anna Hazare crisis has drawn flak but the strategy was deliberate, they say.

Rahul’s grooming is being done slowly, mindful of criticism that Indira Gandhi had given younger son Sanjay too much power too quickly and, to a lesser extent, to elder son Rajiv too.

Congress leaders recognise that Sonia’s task of reviving the party has been more daunting than that of Indira, who was not hemmed in by coalition compulsions. On the other hand, the Congress during those times had an assured vote bank of Brahmins, Dalits, minorities and tribals.