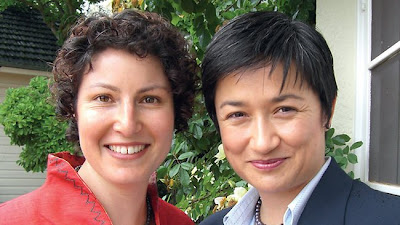 The Australian Government and People Have Proven That They Are Civilized By Respecting Senator Penny Wong's Private Life.

(BBC) In Australia, the news that Finance Minister Penny Wong and her partner, Sophie Allouache, are expecting a child has generated a minimum of fuss. Indeed, I can report that it has been the non-story of the week.


They conceived using IVF with the help of an anonymous sperm donor. Ms Wong decided to announce the news earlier this week because she acknowledged there would be interest from the public as a result of her high-ranking position within the government and because she wanted to protect her pregnant partner from any undue publicity.


Though a strong advocate of same-sex marriage - a stance that puts her at odds with Prime Minister Julia Gillard - Ms Wong said she was not making a political point.


''You have a child because you want a family and you want to have the opportunity of raising a child together," she told Phillip Coorey of the Sydney Morning Herald.


"You don't have a child to make a political statement." Julia Gillard publicly congratulated her friend and trusted colleague, as did Julie Bishop, the acting opposition leader.


Finally, Ms Wong is yet another reminder of the changing face of Australia. She is not only the first openly gay federal cabinet minister, but the first Asian-born minister. She came to Australia from Malaysia.


To these firsts, I dare say she would like another: that of being the first Australian politician to take part in a same-sex marriage.