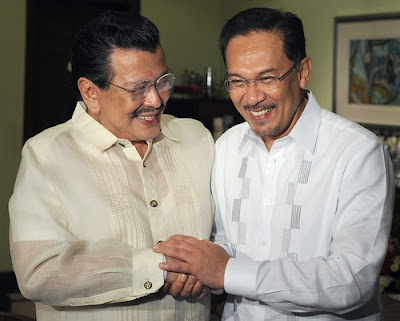 Former President Joseph Estrada and his visiting ally, Malaysian opposition leader Anwar Ibrahim, are demanding the punishment of the perpetrators of the alleged 2004 and 2007 poll fraud, a television report said Friday.In a forum at Club Filipino in Greenhills, San Juan City, Estrada challenged former President Gloria Macapagal-Arroyo to face the poll fraud allegations, reported Mark Salazar on GMA News TV’s “Balitanghali" newscast.Anwar, who once served as Malaysia’s deputy prime minister, supported Estrada’s call, noting that the evidence on the alleged poll fraud is "overwhelming."Both leaders underwent imprisonment in the past – Estrada for plunder and Anwar for sodomy and corruption, "Balitanghali" reported.

This page requires a higher version browserEstrada also commended resigned Senator Miguel Zubiri for giving up his Senate seat, and suggested that Zubiri take the witness stand on the alleged election cheating. Estrada said he believes Zubiri is innocent, according to the same television report.

The former chief executive also took a jab at the Arroyo couple, saying that the former president and her husband, lawyer Jose Miguel “Mike" Arroyo, are faking their illnesses.

Estrada said the real disease afflicting the couple is corruption.His wish is for the Arroyo couple to be jailed, Estrada said.At the same time, Estrada criticized the "slow" processes to investigate and prosecute the Arroyos. He contrasted this with the process to prosecute him during the Arroyo administration, when the government even formed a special court to expedite the prosecution process.

Meanwhile, the Philippines suffers a tamer corruption problem than Malaysia, Anwar was quoted in "Balitanghali" report as saying.He said the extent of corruption in Malaysia would not only involve two helicopters, for example, but two submarines. Malaysia’s judicial system is also dysfunctional and its media remains unfree, Anwar added.

At present, the Philippine Senate is investigating the sale of two used helicopters passed of as new to the Philippine National Police in 2009. A businessman has tagged Mr. Arroyo as the owner of the two helicopters, an allegation denied by the camp of the First Gentleman. — Paterno Esmaquel II/RSJ, GMA News
Posted by Joshua Lopez at 11:00 AM