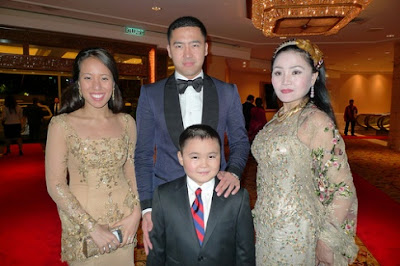 This is Alarming & Rather Disturbing!


On Sunday, prominent Indonesian daily Kompas apologised to Prime Minister Najib Abdul Razak for a report it published about him and his wife, Rosmah Mansor.


However, Malaysiakini has learnt that the subtle apology, buried in an interview with Najib, was a sudden change of mind by the Kompas top management at the eleventh hour.


Among others, the article linked Rosmah with the controversial purchase of a RM24 million ring, and alleged that Rosmah's soon-to-be in-law, Maira Nazarbayev, was linked to the "Russian mafia".


Maira Nazarbayev, of Kazakhstan, is the mother of Daniyar Nazarbayev, who is engaged to Nooryana Najwa, the daughter of Najib and Rosmah ( left ).


The Kompas article described Rosmah as having "a life full of controversies", and linked her to Perimekar, the company alleged to have received multi-million ringgit in commission for the Scorpene submarine procurement.


According to the author, the dubious deal is one of the factors that led to the murder of Mongolian woman Altantuya Shaariibuu in 2006.


Realising the article could resurrect issues highly detrimental to Najib's reputation, two of Najib's informal public relations advisers - one of whom is associated with an Indonesian conglomerate - scrambled to do damage control.


Sources told Malaysiakini that the apology demanded by the Prime Minister's Office (PMO) was initially rejected by the Kompas editors who stood by the article, especially on the alleged underworld links of Maira, which have been widely publicised on the Internet.


The two advisers of Najib then proceeded to threaten Kompas with legal action, but this too failed to subdue the influential Indonesian daily.


Kompas however agreed to give Najib the right of reply by sending its international editor, Jimmy Harianto, to interview Najib in Putrajaya last Thursday which would allow the prime minister to deny and rebut the allegations.


This explains the strong reactions from PKR leaders on Sunday on micro-blogging website Twitter after Umno Youth Khairy Jamaluddin claimed that Kompas had apologised for its "lies and fabrication", which Khairy had linked to PKR.


But both Nik Nazmi and Eekmal were taken aback less than one hour later when national news agency Bernama confirmed that Kompas did indeed apologise to Najib on Sunday. Obviously the duo was not aware of Kompas' last-minute reversal.

Apology made under 'extraordinary circumstances'


It was unknown why Kompas made a sudden U-turn, but the sources claim that the decision must have been made under "extraordinary circumstances".


However, the newspaper did not conspicuously publish a full apology - it was more like a ‘half apology'.


The apology was buried in paragraph 10 on page 10 of the newspaper in a report entitled 'PM Najib Razak: Demokrasi Juga Terjadi di Malaysia' (PM Najib Razak: There is democracy in Malaysia too).


The article, an interview with Najib, quoted the premier as denying the allegations in the Kompas report, and was followed by a one-line apology that reads: "Over the said report, Kompas chief editor Rikard Bagun, on Saturday (Aug 20) in Jakarta, specifically sought to apologise to the government leader and his family."


Other than publishing Najib's denial, the daily did not state that the allegations in its article are untrue, and neither did it retract the article, which can still be accessed here .

In Malaysia, the pro-government mainstream media in Malaysia trumpeted the apology, giving significant coverage in their publications yesterday.

Umno-owned Utusan Malaysia dedicated its front page to the apology, coupled with a photograph on page 4, showing Jimmy 'apologising' to a smiling Najib.

However, Malaysiakini understands that Maira's alleged underworld link will continue to haunt the premier's family as Indonesian journalists who are upset over the Kompas apology will dig up unfavourable reports of Maira ( right ), which can be easily found in cyberspace.

"At the end of the day, Najib will become the laughing stock of the public in Asean - a prime minister whose in-law is a female samseng (gangster)," said one Indonesian journalist.
Several attempts were made to contact Kompas editors on the apology, but Malaysiakini was given the runaround.