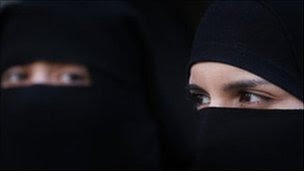 Simple, if you want to wear the headgear/ face veil, get out of Europe! Europe has legitimate security concerns.
An Italian parliamentary committee has passed a draft law which will ban women from wearing veils which cover their faces in public.
The bill, which has the backing of Prime Minister Silvio Berlusconi's central-right coalition, would prohibit the wearing of a burka, niqab or any headwear which covers the face. The bill will go to a parliamentary vote after the summer recess.
Belgium and France have already banned the full-face veil in public.