Ibrahim Ali A Liability To UMNO 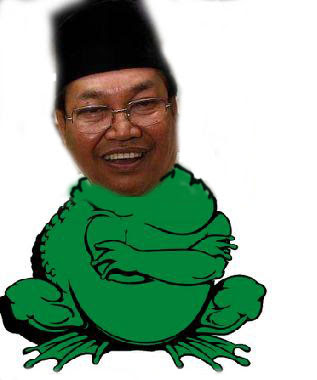 The Government has not been responsive to you Ibrahim Ali because You are A Sick Barking Dog & A liability to UMNO and BN at this Crucial Time Of The Upcoming General Elections. If You Continue this way, UMNO will have to Put You Down!

Not to be outdone by another fast-rising rabble-rouser Ezam Mohd Nor, Perkasa president Ibrahim Ali and his motley group of self-proclaimed defenders of the Malay race are back again stirring up trouble.

This time, their hapless victim is the Star, the newspaper owned by the MCA but which many say is controlled by UMNO.

"I think we should 'chop' the Star as an anti-Islam. I don't accept the explanation that it was a mistake. We all know who the Star editor is," Ibrahim Ali told reporters after chairing a Perkasa supreme council meeting on Sunday.

“I believe that they are testing the limits of Muslim tolerance." Umno's new terrible twins: Ibrahim-Ezam. But to many who follow the local political scene, his words were puzzling since the top Star editors have been frequently accused of bending backwards for Prime Minister Najib Razak. Just a year or so ago, UMNO even awarded a cash prize to one of its editorial team for being the most "friendly" paper towards their party.

This led critics to say that Ibrahim Ali was "running out of issues" and trying to stay relevant and a step ahead of new rival for the affections of the Malay community, UMNO Senator Ezam Mohd Nor.

"Ibrahim Ali is scraping the bottom of the barrel," said PKR stalwart Eddie Wong. "He is running out of issues. If he doesn't make noise, heit won;t work either. will be seen as irrelevant. Since the disgrace of the UiTM Ibrahim li Leadership Award, the UMNO elite finally realized he was a liability and not an assets as he thinks. This may be why Ezam has been tasked by Najib to take over the lead singer role in the UMNO-Perkasa band. But he will also flop."

The Star had published a feast of pork dishes in its food section but under the unfortunate title of 'Ramadan Delights'. Pork is banned to Muslims and a long-standing taboo. The daily has apologised and answered a show-cause letter issued by the Ministry of Home Affairs.
But like Perkasa, Home Minister Hishammuddin Hussein has rejected the Star's explanation, prompting accusations he was trying to impress Muslims with his Islamic credentials during the fasting month.

Meanwhile, Perkasa members carried out a small but very nosiy ceremony burning the Star newspapers as a sign of protest. Members pointed a keris (the symbol of Malay supremacy) at the newspaper, before setting it on fire a. They then "pijak" or stamped on the burning copies of the tabloid.

“I believe that they are testing the limits of Muslim tolerance," said Ibrahim Ali.

Do "something" to the govt (Kepala Hotak Si Katak Tu!)

Ibrahim also threatened to “do something” to the government if it fails to take action over three outstanding matters, the Bersih 2.0 July 9 rally for free and fair elections, the Datuk T sex video against Opposition Leader Anwar Ibrahim and the DAP’s “Christian conspiracy”

“What more do we need? What more needs to be investigated? There were 4,000 police reports lodged against Ambiga, for example. We want the Attorney-General to proceed with action on these issues and whether or not there is a prima facie case, let the courts decide,” said Ibrahim.
“We have been called cowards for not going ahead with our rally when all we did was respect the law and the Yang di-Pertuan Agong’s decree.