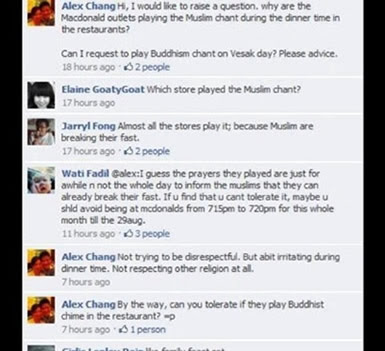 Your racism, ignorance and stupidity speaks for itself!

What A Bloody Stupid Bigot Alex Is! The Chinese Burn all their prayer paper items during the ghost festival which triggers my Asthma and yet i don't complain and even the Police in Malaysia will not take action on such an event even if i drop dead because it's about Religious Acceptance in a Multiracial Country.

So Alex, Please Zip your Racism and Ignorance or stay away from Malaysia & Singapore! You can't even defferentiate prayers and the Opening Of Fast! The Opening Of Fast comes with Azan, What is so wrong with that?!!! I am A Roman Catholic By The Way.

A man has generated heated debate online after he posted comments questioning why McDonald's allowed the Muslim prayers to be played at one of its restaurants. The debate first started after a man known as Alex Chang posted his comments on the McDonald's Facebook wall on Thursday.

He had asked why the fast food giant's outlets are playing the Muslim prayers during dinner time at its restaurants. "Can I request to play Buddhism chant on Vesak Day? Please advice," he asked sarcastically.

While he was identified as a SingTel employee, it was uncertain how this came to light. Chang also did not state the McDonald's outlet which he was referring to. SingTel could not be reached when contacted by Yahoo! Singapore.

His remarks on the issue drew a few comments explaining that the reason could be Muslims are breaking their fast. In response, Chang said, "Not trying to be disrespectful. But a bit irritating during dinner time. Not respecting other religion(s) at all." "By the way, can you tolerate if they play Buddhist chime in the restaurant?" he added.

This was the exchange which took place when Alex Chang first posted his comments on the McDonald's Facebook!

Posting a statement on its Facebook page on Friday, the fast food chain stressed that it respects all races and religions equally, adding that it had to remove some posts from its wall.

"We hope everyone understands that we've had to remove a number of wall posts on our page. We encourage all our Facebook fans to be respectful to one another," it said.

Two hours after McDonald's posted the statement, Chang issued an apology for his comments, saying that it was not meant to be "racist".

"I would like to apologise for the comment that was posted on the McDonald's website.It was not meant to be a racist remark which has offended so many people including our Malay friends. Sorry for my ignorance," he said.

Meanwhile in a separate statement on its Facebook page, SingTel emphasised that it is an "equal opportunity employer" and has a diverse and multicultural workforce.

"We have clear company values and guidelines and do not tolerate discrimination. We expect our employees to be personally responsible for the content of their personal posts online. "We are disappointed that an employee recently posted comments that were seen to be inappropriate and we are counselling him," it said.