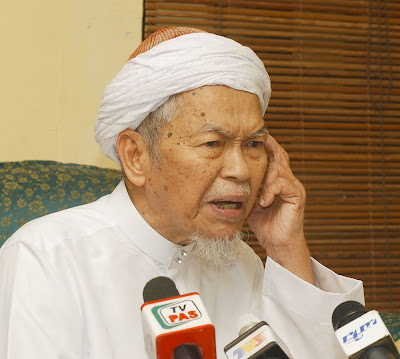 KUALA LUMPUR, July 9 — Datuk Nik Abdul Aziz Nik Mat today attacked the Najib administration for the way in which it handled the Bersih rally today, and warned the government that the mass arrests and police “brutality” will fuel the anger of Malaysians towards the ruling coalition.

“I stress that these actions will only increase the rakyat’s hatred towards Umno. Even though it was the police who had reacted towards the Bersih supporters, everyone knows that the remote control is held by the prime minister who is also the president of Umno.

“What is wrong with the (Bersih) gathering?” the PAS spiritual adviser said in a statement today. During the protest, a total of 1,401 people were detained, including 1,273 men, 115 women, 12 boys and one girl.

The police have now said that all detainees will be released by 9pm today.“Didn’t the Umno president, the same person, once promised that the gathering would be allowed if it was done in a stadium and those involved could ‘scream till early dawn’?” said Nik Aziz.

The Kelantan mentri besar said the government would “pay” for any crime committed today against ordinary Malaysians, and that their punishment would be meted out in the afterlife.
Posted by Joshua Lopez at 2:04 PM