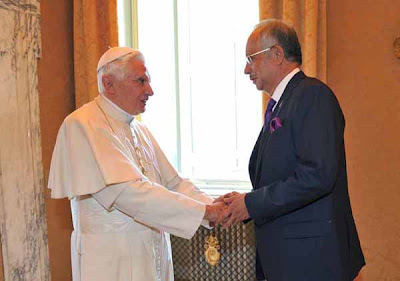 Najib’s audience with Pope Benedict took place soon after his arrival at the palace overlooking a beautiful lake on a hot Italian summer day.

Following the private meeting, Najib introduced members of his entourage, including Datin Seri Rosmah Mansor, to the Pope.

Najib later presented the Pope with gifts in the form of a book titled ‘Najib’ and a framed songket embroidery.

Both of them were later joined by Rosmah and members of the Malaysian delegation for a group photograph.

Najib was then ushered into a separate room for a delegation meeting with Secretary of State of the Holy See, Cardinal Tarcisio Bertone.

It was the second meeting between a Malaysian Prime Minister and the Pope after the one involving former prime minister Tun Dr Mahathir Mohamad and Pope John Paul in June 2002. The Pope is the ruler of both Vatican City State and Holy See.

The Holy See is the universal government of the Catholic Church and operates from Vatican City State, a sovereign, independent territory of 0.44 sq km.

The prime minister’s wife, accompanied her husband on the trip. — Bernama
Posted by Joshua Lopez at 10:07 AM