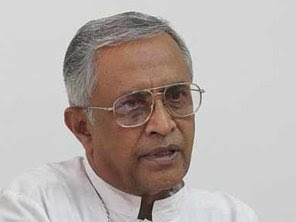 As A Roman Catholic, I feel rather hurt with Tan Sri's Move to jump on the same bandwagon with the PM.

KUALA LUMPUR, July 14 — As Putrajaya gears up to establish formal ties with the Vatican, the archbishop of Kuala Lumpur has come under scrutiny from certain sections of his congregation who question his role in the government’s diplomatic mission.
Some of the harshest criticism against Archbishop Tan Sri Datuk Murphy Pakiam come, surprisingly, from within the local Roman Catholic Church, with a vocal few labelling the senior cleric a “sellout”, as one local priest recounted to The Malaysian Insider.
Rev Father Michael Chua acknowledged that Pakiam (picture) has come under attack since word got out that the archbishop will be accompanying Prime Minister Datuk Seri Najib Razak on the federal government’s official visit to meet Pope Benedict XVI next week.
“Many critics may view the establishment of these ties and the participation of the local hierarchy as a ‘selling out’ or radical change of position by the Church,” said the ecclesiastical assistant in the Archdiocesan Ministry of Ecumenical and Inter-religious Affairs (AMEIA) for the Catholic Archdiocese of Kuala Lumpur.
The priest attributed the Catholic community’s anger to the timing of the visit.
“Perhaps, what may render it as controversial to some people is that Putrajaya chooses to respond at this time,” he said.
“It is unfortunate that this event comes after the occurrence of several tensed and critical events, including the use of the ‘Allah’ word in the Church's publication, the Alkitab and the Bersih rally,” he said, linking their outrage to a series of current events that have raised chilled relations between Christians and the majority Muslim federal government.
Chua said if not for those issues “most Catholics would be celebrating that ties are finally being established between the Vatican and Malaysia after years of pursuing this”.
The other problem, he said, was that many Malaysian Catholics were not able to distinguish between a state that has diplomatic ties with the Vatican and a state that does not, which causes them to question why the archbishop is accompanying the Malaysian delegation.
“In the case of the former, a visit by a head of state would therefore not involve the local hierarchy as all communique will be via the respective state's ambassadors (the nuncio, in the case of the Vatican),” Chua explained.
The Malaysian Insider understands that the Catholic Church does not usually send a representative to accompany the government’s diplomatic missions.
The priest explained that many were under the impression that the local Church has abandoned its role in standing up for values to build a just, peaceful and equitable society.
Chua confessed that he has been approached by several concerned churchgoers over the seeming conflict of interests for a man of the cloth to act as the government’s wingman on an official trip.
“However, in the present case, since there are no diplomatic ties between the Vatican and Malaysia, Archbishop Pakiam, a local prelate of the Catholic Church who has been instrumental in laying the ground work for this state-to-state diplomatic relations, has been invited by the Vatican to be part of this process,” Chua said. He further explained that the Vatican has always sought relations with all countries.