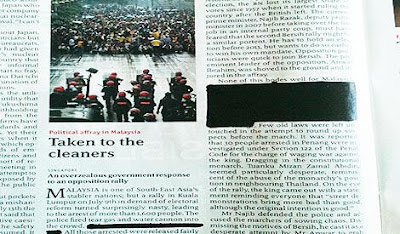 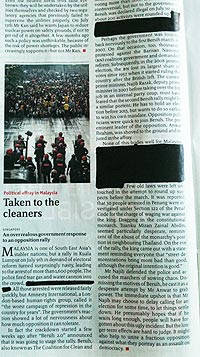 Again, The Malaysian Government is acting out of terrible fear!

The July 16 edition of The Economist has been defaced by the Home Ministry in an apparent attempt to censor a report on the Bersih 2.0 rally for electoral reform.
“The Economist July16 issue has been censored/black inked on Bersih story by Home Ministry,” reads a tweet by Ipoh Barat MP M Kulasegaran.
In photos distributed via micro-blog site Twitter, the report headlines ‘Political affray in Malaysia: Taken to the cleaners’ shows lines blacked out by what seems to be a permanent marker pen.