Malaysian Army: Disperse Or We Will Shoot! 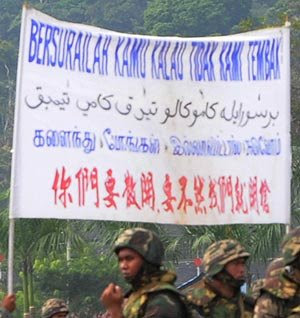 Congratulations Ruling Government! You are fast transforming into Juntas!

The authorities have stepped up their threats against those intending to participate in assemblies or demonstrations by showcasing the kind of treatment that would be meted out to those violating the ban on ‘illegal’ rallies.

Among the banners held up during a simulation exercise on crowd control yesterday between the Royal Malay Regiment and Federal Reserve Unit (FRU), were two conspicuous ones warning that participants will be shot if a dispersal order is not heeded.

'Bersurailah kamu kalau tidak kami tembak ' (‘Disperse. If not, we'll shoot’) reads the banners held by some of the 120 members of the Royal Malay Regiment’s the 25th battalion during the joint-demonstration with 120 members of the FRU.

The police Army Unit and Air Wing also took part in the simulation exercise at the Sungai Besi camp, which Utusan Malaysia said showcased the police and army forces' capabilities in handling any eventuality, including illegal demonstrations.

Below the banner's stern message was a transliteration of the same phrase in the ‘Jawi’ script as well as translations in Tamil and Chinese.

The police are ready to cooperate with the Malaysian Armed Forces in controlling participants at the Bersih 2.0 'illegal' rally scheduled for Saturday, Bukit Aman internal security and public order director Salleh Mat Rashid had been reported as saying yesterday.

"We'll see how it goes. If necessary, we will seek (the army's) help to maintain public order," he told reporters. Salleh however denied that the joint demonstration exercise had anything to do with the rally planned by the coalition for clean and fair elections.

"We are holding this merely to celebrate and show our appreciation for the Prime Minister's Innovation Award 2011, which we received recently," Salleh said.

There have been weeks of heightened tensions between Bersih 2.0 and its critics Umno Youth and Perkasa. About 200 people have been arrested for publicly displaying support for the rally planned for Saturday.

Yesterday, Bersih 2.0 agreed to holding its gathering at a stadium instead of on the streets of Kuala Lumpur.

Bersih chairperson Ambiga Sreenevasan today announced that the coalition has chosen Stadium Merdeka as the venue for the rally. The application was, however, rejected by the stadium authorities today.

The crackdown on Bersih supporters has continued unabated, with two PKR activists in Negri Sembilan arrested yesterday for possession of paraphernalia related to the rally.

Last night, a legal briefing for a group of Subang PAS and PKR members was thwarted when police cordoned off a hall in Kota Damansara, Petaling Jaya.

According to lawyer Farhana Abdul Halim, the Subang PKR division had invited her group - Lawyers for Liberty - to conduct a briefing on the rights of citizens upon arrest.

She said that about 50 police personnel had stopped party members from entering the premises on the basis that a permit was required to hold the event.
Posted by Joshua Lopez at 2:45 PM