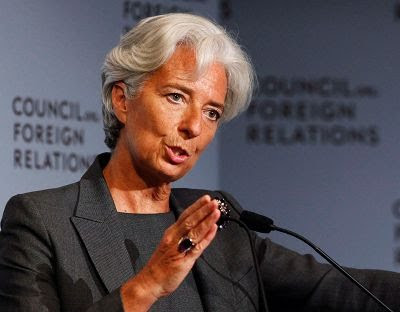 Special Report: U.S. Debt Crisis
NEW YORK, July 26 (Xinhua) -- The new managing director of the International Monetary Fund warned Tuesday that time is running out for the U.S. to raise the nation's 14.3 trillion borrowing limit.
"On the debt ceiling, the clock is ticking, and clearly the issue needs to be resolved immediately," Christine Lagarde said in a speech at the Council on Foreign Relations.
"I'm hopeful that the political courage shown by European leaders will soon be followed by bold fiscal action in the U.S.," she said.
Lagarde, the former French finance minister, said that if America saw a debt default, it would be "a very very serious event," not only for the U.S., but also for the entire world.
President Barack Obama and Republican lawmakers are at an impasse in negotiations to raise the nation's $14.3 trillion borrowing limit. The federal government is at risk of defaulting on its debt after Aug. 2 if an agreement isn't reached by then.
Credit rating agencies such as Standard & Poor's and Moody's have warned that they will downgrade the United States' top credit rating if an agreement isn't reached. Standard & Poor's has also said it may reduce the nation's credit rating if there aren't steep cuts to the U.S. budget deficit.
Lagarde took the helm of the IMF on July 5, after her predecessor, Dominique Strauss-Kahn, resigned to fight allegations of sexual assault.
U.S. Treasury bonds play a ``central role'' in world financial markets, the IMF said in a staff report Monday. U.S. Treasury securities have traditionally been seen as the safest investment in the world.
More than $4 trillion of Treasurys are held by governments in China, Japan and other countries, as well as by private investors. That means higher interest rates on Treasurys could have a global impact.
Lagarde said sharp cuts in government spending and other measures to reduce the budget deficit may slow the economy in the short run, but not by much.
The IMF director also said she welcomes the new bailout plan for Greece reached by euro-zone leaders last Thursday.
"The agreement shows that European leaders believe in the euro, and will do what it takes to secure its destiny. It has been welcomed by financial markets, as reflected in the stronger euro and lower peripheral bond spreads," she said. "But turbulence could easily resurface. For this reason, it is essential that the summit's commitments should be implemented quickly."
Lagarde urged Greece to implement what it needed to do in frame of the rescue package. In her opinion, what Greece needed to do is "implementation, implementation," because the clock is also ticking.
Posted by Joshua Lopez at 5:32 PM