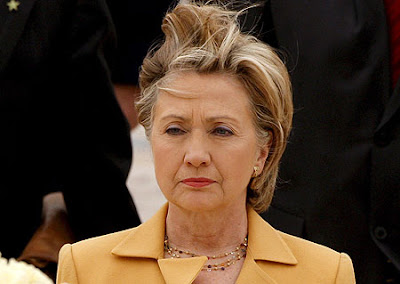 US Secretary of State Hillary Clinton: "President Assad's position was becoming"less tenable" by the day." "The demands of the Syrian people for change only grow stronger."

WASHINGTON (Reuters) - The reported torture of a 13-year-old Syrian boy demonstrates a "total collapse" of the Syrian government's willingness to listen to its people, U.S. Secretary of State Hillary Clinton said on Tuesday.

Clinton also told reporters that with each passing day the Syrian government's position grows less tenable in the face of 10 weeks of protests against the 11-year reign of Syrian President Bashar al-Assad.

The New York Times reported on Monday that an online video showed a 13-year-old boy, arrested at a protest on April 29, who it said had been tortured, mutilated and killed before his body was returned to his family.

"I think what that symbolizes for many Syrians is the total collapse of any effort by the Syrian government's to work with and listen to their own people," Clinton told a news conference she held with Colombia's foreign minister. "I can only hope that this child did not die in vain but that the Syrian government will end the brutality and begin a transition to real democracy."

"President Assad has a choice, and every day that goes by the choice is made by default. He has not called an end to the violence against his own people, and he has not engaged seriously in any kind of reform efforts," she added.

"Every day that goes by the position of the government becomes less tenable and the demands of the Syrian people for change only grow stronger," Clinton said.

Earlier on Tuesday, State Department spokesman Mark Toner called the reports of the boy's torture "horrifying" and "another case of the ongoing human rights abuses that we have seen carried out by Syrian forces."

"That case in particular is appalling and we believe that Syria should be held accountable for these and other human rights abuses," he said.

Asked about a Syrian state television announcement that Assad had issued a general amnesty covering "all members of political movements, including the Muslim Brotherhood, Toner said: He has talked reform but we have seen very little in the way of action ... he needs to take steps -- concrete steps, not rhetoric -- to address what is going on in the country."
Posted by Joshua Lopez at 9:23 AM