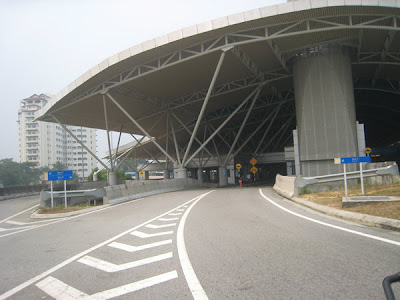 It was clearly a lack of efficiency on the part of customs where no officers or workable systems were available at the point of entry. This is nothing unusual in Malaysia. The manner in which these two female Singaporeans were treated is a downright injustice to human rights and dignity.

What was the nude squatting for? Afterall they passed the security channel of Singapore which everybody knows is more stringent than Malaysia's. These Customs officers have proven to be nothing but notorious bullies and they have brought international disgrace to Malaysia and proven that we indeed have a third world mentality. Hence, The Malaysia Government has to deal with such idiots who serve the country! These officers should be terminated.


Two Singaporeans were detained by Malaysian law enforcement officers on 9 June after they were accused of entering Malaysia illegally. The pair were also ordered to strip and do squats with their hands on their ears for 10 times when they were sent to a detention centre.
Their ordeal happened last Thursday when Lim Lili and Zhan Tingting (not their real names) drove across the causeway for supper.

When they reached Malaysia customs, both women did not obtain entry chops on their passports. According to Lianhe Zaobao, Lim and Zhan reached the customs at about 1.30am. Lim recalled that when she was at the customs, there was poor visibility because of the rain.
She drove into a lane that displayed a green light which signalled that the lane was in operation.
Lim recalled seeing that the lane had no immigration officer at the counter and it was at this point that they didn't get their passports chopped. Zhan then alighted to purchase a "Touch N Go" prepaid card to pay for their entry into Malaysia.

As it was their first time experiencing the new biometric scanner at the counter, Lim used the intercom and tried to ask another officer for help. Both waited at the counter for five minutes before they decided to move on as Lim thought that there would be another counter for them to scan their fingers.

But instead, they drove into Johor Bahru without getting their passports chopped and fingerprints scanned. Realising something was wrong, Lim drove her car back to the customs to obtain an entry chop for their passports.

However, when reached the customs at 2am, they were accused of entering Malaysia illegally and questioned by Malaysian law enforcement officers. "When my statement was taken, both of us tried to explain ourselves and requested for them to check with Singapore's immigration department to check their departure timings and CCTV footage to clarify that once we knew there was a mistake, we quickly turned back," said Zhan.

The officers then informed them of the offence and punishment curtly, emphasising the RM10,000 (S$4,069) and jail term. Both women were detained in a room until 5pm on 10 June and were each allowed to make a phone call each. One of them called their friend while the other spoke to her brother, who contacted the Singapore High Commission in Malaysia and the Ministry of Foreign Affairs.

"Somebody with a higher rank came and started speaking to us in Malay. A translator told us if we were willing to accept a fine of RM3,000 (S$1,220) to resolve the situation," said Zhan.
"And because we were so tired, we agreed to pay the fine and we signed an agreement that was in Malay," Zhan added.

Officers led the two women to an ATM machine to withdraw cash to pay the fine. But the women received another shock when the officers suddenly said that they will be sent to a detention centre in Pontian district and will be detained for up to 14 days. Lim then asked the officers, "I thought we already settled the case?" They were later handcuffed and sent to the women's division at the detention centre. Lim and Zhan met a female officer who ordered a strip search. Both women were made to strip and do squats with their hands on their ears for 10 times before they were allowed to change into their prison uniforms.

Zhan said: "The place was dirty and smelly, the roach-infested room was two-thirds of the basketball court, no bed, four wooden walls, with 50 people in it." "We were treated like criminals even before we were pronounced guilty, it was humiliating. Most of the detainees were Filipinos and Indonesians without passports. We were the only Singaporeans."

After a night in the centre, the officers woke them up at 5am to do the Islamic morning prayers.
She said in the span of 24 hours, besides eating and praying, we were stuck in the room. When it was time to eat, we did not have forks and spoons and ate with our hands. We did not dare to finish eating, but the rest of the detainees told us to finish because if we did not, the officers will punish us."

At the detention centre, the two of them were bitten by mosquitoes and bugs the whole night. Zhan's hands and legs had red spots and her whole body hurt while Lim's back and neck were bitten, and her skin was red and itchy.

On Friday night, an official handed both woman a warning letter and informed them that they will not be charged, jailed or fined. When Lim went to retrieve her car, she saw it was badly scratched and damaged. They were also told by an immigration officer who handled their departure proceedings that they will not enter Malaysia easily next time.

Looking back, Zhan acknowledged their mistake but said, "This is only a trivial mistake. Does it warrant a need to detain us at the detention centre?" The pair angrily added: "Next time even if you invite me over to Malaysia I wouldn't want go in!" They were worried that the incident would affect their jobs, and wanted to remind their friends to be more careful when travelling to Malaysia. Under their lawyer's advice, the pair might seek compensation from the Malaysian authorities.
Posted by Joshua Lopez at 10:06 AM