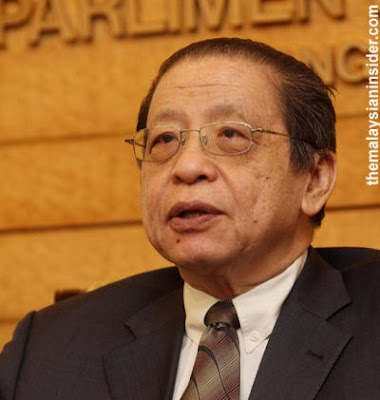 Lim pointed out to the MCA president that Umno’s repeated attempts to lure PAS into forming a unity government with Barisan Nasional (BN) was in itself against the concept of 1 Malaysia."Why is it that Umno has to try to entice PAS for the sake of Malay unity? If you want to talk about 1 Malaysia, why not BN instead lure PR to form a unity government?” he said when contacted.

Since Election 2008, Umno has made numerous attempts to draw PAS into its fold, ostensibly using Malay unity to bargain with the Islamist party.

Lim reminded Dr Chua of his party’s constant criticism of DAP’s partnership with PAS in the Pakatan Rakyat (PR) pact and asked the former minister why MCA has yet to strongly condemn Umno for courting PAS.

Referring to a recent report in an online news portal, Lim noted that Umno had purportedly offered three federal ministerships and five mentri besar posts to PAS if the party were to agree to a unity government.

"What is MCA’s position on this? MCA has been attacking DAP for co-operating with PAS but Umno is trying to do the same. MCA should issue an ultimatum to Umno or immediately quit BN now,” he said.

Lim also questioned if Dr Chua, by his definition of 1 Malaysia, was predicting an end to race-based parties in BN.

"When will BN dissolve all communal-based parties and form one party that is open to all Malaysians?” he said.

“It has taken Dr Chua two years and two months to realise that we should be Malaysians first and our races, second. But in any case, he is yet to convince all MCA leaders to state the same.“And what about our Cabinet ministers? Our own DPM (deputy prime minister) has already said he is Malay first and Malaysian second,” he said.

Lim added that Dr Chua’s statement was likely borne of the latter’s struggle to find his footing in the “maelstrom of Umno’s racial politics” and his attempt to save MCA from losing relevance.
Posted by Joshua Lopez at 7:48 PM