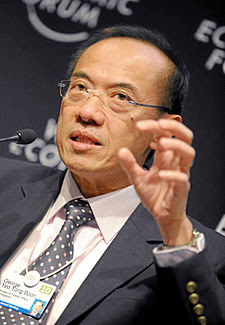 George Yeo certainly deserves such an honour & He holds the calibre for the Presidential Seat.

George Yeo Yong-Boon (simplified Chinese: 杨荣文; traditional Chinese: 楊榮文; pinyin: Yáng Róngwén; born 13 September 1954) is a former politician from Singapore. A member of the governing People's Action Party (PAP), he served in the Cabinet from 1991 to 2011 as the Minister for Information and the Arts (1991–99), Minister for Health (1994–97), Minister for Trade and Industry (1999–2004) and Minister for Foreign Affairs (2004–11). However he lost his seat in Parliament at the 2011 general election when the PAP's team in the Aljunied Group Representation Constituency was defeated by the team from the Workers' Party, following which he announced that he was retiring from active politics.
He initially ruled out a run for President or any form of elected office, calling himself a "free spirit" and not "temperamentally suited for such a job". He later announced on Facebook that he was seriously considering a run for the Presidency and it was reported in the media he was "thinking hard" about the possibility.
Prior to entering Parliament, Yeo was a Brigadier-General in the Republic of Singapore Air Force. He served as the Chief-of-Staff of the Air Staff from 1985 to 1986, and as the Director of Joint Operations and Planning at the Ministry of Defence from 1986 to 1988.
Yeo received his primary school education at St. Stephen's School. He studied at St. Joseph's Institution and finished his O-Levels at the top of the class in 1970. As a President's Scholar and Singapore Armed Forces (SAF) Scholar, he graduated from Cambridge University with a degree in engineering in 1976.
Posted by Joshua Lopez at 10:58 AM