President Obama was Blown Away By British Royal Wedding 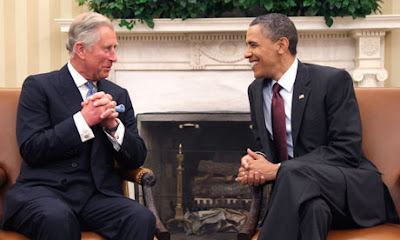 The royal wedding of the Duke and Duchess of Cambridge left America mesmerised, President Obama has told the Prince of Wales.
The US president said he was impressed by how Prince William and his new wife Kate handled the pressure of the big day in an informal meeting with the groom's father in the Oval Office of the White House.
The president joked with Charles that he could not have coped with such a huge ceremony himself – he had 300 guests at his wedding to Michelle.
The Obamas were not present at the wedding at Westminster Abbey in London on Friday but his comments suggested he watched at least some of the event.
The meeting came at the end of a two-day visit by Charles to Washington. The two men last saw each other in France during the 65th anniversary commemorations for the D-Day landings, and earlier that year had chatted at Buckingham Palace during a reception for world leaders attending a G20 summit in London.
Their conversation turned to the military and Charles described how his son Prince Harry was getting to grips with the difficult task of flying the Apache helicopter. The president sympathised and said piloting the complicated machines was suited to the "iPod generation".
The heir to the throne also revealed to the president how he worried for Harry when he was in Afghanistan. The prince served for 10 weeks as a forward air controller in Helmand Province from 2007-08. http://www.guardian.co.uk/
Posted by Joshua Lopez at 4:44 PM