Malaysian Buddhist Handicap Girl made to convert to Islam 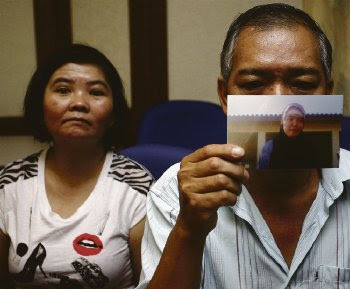 This is just one of the many incidents where desperation to convert a person takes place by a bunch of irresponsible Muslims who disregard a person's human rights and family's awareness & approval. In this case, how does a mentally handicap girl grant consent to allow herself to be converted to a religion unknown to her?!


GEORGE TOWN: A Buddhist couple who reported their mentally-challenged daughter missing on May 11, were dumbfounded when they discovered the next day that she had converted to Islam.

Meat seller Eow Chye Seng, 51, said his daughter, Su Chin, 23, was converted at the southwest district religious office in Balik Pulau after she left their home at Taman Seri Hijau at Jalan Van Praagh near here.Nobody had a clue why she left home suddenly and converted, he said.
They only discovered later that she had gone with a foreigner, believed to be a Bangladeshi known only as Kassim, who took her away on a motorcycle, he added.

"We learned about him from Su Chin's friend from the Eden Handicap Service Centre, where Su Chin was a trainee staff."We then realised that she had been in contact with this unknown man for some time, perhaps since Chinese New Year. She had been telling us she wanted to go to Gurney (Plaza) with friends and watch movies so we suspected nothing," he said at a press conference at the state MCA headquarters yesterday.

Su Chin, now known as Sofiah Eow Abdullah, was supposed to go to the handicap service centre in Jalan Sir Hussein for training at 9am on May 11.When the driver arrived at Su Chin's flat and could not find her, he informed the centre's training unit head Lee Sin Kok, who immediately notified her father.When he returned home and searched the house, he realised that his daughter had taken some belongings, including her birth certificate and a passbook for an account he shared with her, and left no messages.

With Lee's help, Chye Seng and his wife, Ch'ng Sai Mee, 48, managed to get Kassim's mobile phone number and upon contacting him were told that their daughter was now a Muslim.They learned that Kassim was no longer with Su Chin, who has been staying at a home called Rumah Transit Saudara Kita Permatang Tok Gelam in Penaga, near Butterworth, to learn about Islam.When the couple went to the home, Su Chin refused to meet them but agreed to speak with Lee and another relative.Lee said when questioned, Su Chin revealed that Kassim told her they could be together if she converted, and he even promised to buy her a house in Batu Feringghi and a car, but could give no information about the man.

She lodged a police report on May 19, stating that she converted of her own free will.State MCA public services and complaints bureau deputy chief Lim Thoon Deong said with Su Chin's condition, she could not have made such an important decision on her own or understood what she was doing.He said according to medical records from July last year, including an evaluation by a clinical psychologist, Su Chin's mental capacity was below that of a seven-year-old."She may be an adult. But in her case she is still under the care of her parents, who are not consenting to her conversion to Islam that was made without their knowledge, and want it revoked."

We have consulted our legal bureau and believe that this conversion can be disputed due to such special circumstances. We hope everything can be resolved amicably."Lim added that while the state MCA legal bureau looked into the matter, the couple was also advised to present their case to the religious department, whose officers might not have known about Su Chin's condition when the conversion took place.Meanwhile, state Religious Affairs Department director Sazali Hussein said a person who was 18 and above would not need the consent of another person to convert but in Su Chin's case, the department would have to check further. "We will look into the matter."
Posted by Joshua Lopez at 1:16 PM