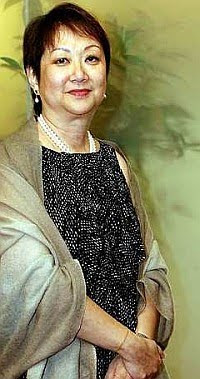 The tweet read: “Congratulations to Judy Cheng-Hopkins for being included in Forbes' top 10 powerful women in UN. She is an inspiration to all.” The list is a run-up to Forbes' selection of “The 100 Most Powerful Women 2011”, which will be released on Aug 24.

The top 10 women in the UN list have an unprecedented level of institutional power. They manage US$5bil (RM15bil) budgets and mobilise resources and over 100,000 staff worldwide. They are responsible for coordinating thousands of peacekeepers in conflict zones throughout the world.

Penang-born Cheng is married to Dr Thomas Hopkins, a retired consultant in development work. They have two daughters, Tara, 28, and Fiona, 23. Prior to her appointment, from 2006 to 2009, Cheng was the assistant High Commissioner for Refugees in charge of operations, active in 118 countries.
Posted by Joshua Lopez at 9:54 AM