British back Lagarde to head IMF 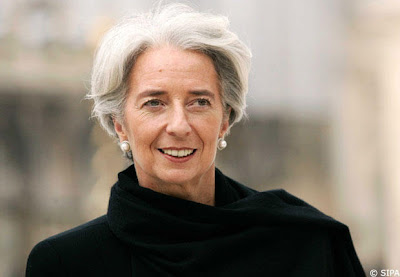 It's Due Time For Woman Power!

(CNN) -- The United Kingdom will back French Finance Minister Christine Lagarde to become head of the International Monetary Fund, British Chancellor George Osborne said.
The IMF is scheduled to begin accepting nominations for its top job Monday, following the resignation of Dominique Strauss-Kahn, who faces sexual assault charges in the United States.
"We support her because she's the best person for the job, but I also personally think it would be a very good thing to see the first female managing director of the IMF in its 60 year history," said Osborne, Britain's equivalent of a finance minister.
Strauss-Kahn, who is accused of trying to rape a maid last week in his suite at the Sofitel hotel in New York, was released from Rikers Island jail on Friday and is staying with his wife, Anne Sinclair.

He proclaimed innocence in a resignation letter to the IMF Executive Board late Wednesday. "To all, I want to say that I deny with the greatest possible firmness all of the allegations that have been made against me," he said.
The IMF said Friday that it aims to complete the selection process by June 30.
Lagarde is likely to face opposition from developing economies, who are proposing their own candidates for the post.
Mexico will put forward Central Bank Chief Agustin Carstens as a candidate, the state-run news agency reported Sunday.
Carstens worked with the IMF as the executive director for Mexico, Spain, Venezuela and Central America, and was later a deputy managing director there, Notimex said.
Since the IMF was created in 1946, all 10 of the institution's managers have been European. Four of them have been French.
Posted by Joshua Lopez at 2:16 PM