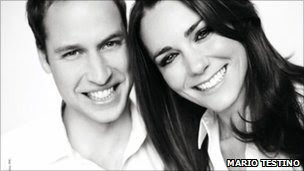 The wedding ceremony will be the epitome of "Britishness", St James's Palace says

(BBC) Prince William has gone on an impromptu walkabout ahead of his wedding to Kate Middleton to meet royal watchers gathered near Buckingham Palace.

He spent several minutes shaking hands, chatting and posing for pictures telling the well-wishers: "All I've got to do is get the lines right."

The couple say they have been "incredibly moved" by public reaction. In a message in their official wedding programme they thanked "everyone most sincerely for their kindness". During Friday's Westminster Abbey ceremony Miss Middleton will vow to "love, comfort, honour and keep" Prince William but will not vow to obey him.

The service will be the epitome of "Britishness", St James's Palace said.

VisitBritain has predicted more than 600,000 people will be on the streets to watch Friday's events and several hundred are already camping out in tents and sleeping bags outside the abbey and in The Mall.

Prince William, who is spending the evening with the Prince of Wales, Duchess of Cornwall and Prince Harry, emerged from his London home Clarence House to walk to The Mall at about 2030 BST.

Some of the the crowd were spending the night on the street and the prince asked them about their preparations.

Earlier, the Duchess of Cornwall also met some of the fans in The Mall. She described Prince William and Miss Middleton as being "all ready" for their big day and said the Royal Family were

Meanwhile, the Foreign Office says the invitation for the Syrian ambassador in London has been withdrawn following reports that up to 400 pro-democracy protesters have been killed in Syria by security forces in recent weeks.

A Foreign Office statement said: "Buckingham Palace shares the view of the Foreign Office that it is not considered appropriate for the Syrian ambassador to attend the wedding."

Earlier on Thursday Miss Middleton took part in her last rehearsal at Westminster Abbey, with best man Prince Harry, the bridesmaids and pageboys.

Miss Middleton and her family are gathering at the Goring Hotel in Belgravia. She arrived at the hotel at about 1745 BST accompanied by her mother and sister and stood outside for a short while as photographers took pictures.

Some 50 foreign heads of state are among the 1,900 invited guests attending the wedding.

Meanwhile the Queen has hosted an event for British and foreign royals at the Mandarin Oriental Hotel, near Hyde Park, in central London.

British royals including the Duke of York, the Princess Royal and the Earl and Countess of Wessex attended, as well as princesses Beatrice and Eugenie.

It has emerged that the Queen will leave for a weekend away after hosting the wedding day lunchtime reception, giving over Buckingham Palace for William and Kate's black tie party in the evening.

It means the Queen and Duke of Edinburgh will miss Prince Harry's best man's speech and Michael Middleton's father-of-the-bride address.

In their official wedding programme released on Thursday, the royal couple's message reads: "We are both so delighted that you are able to join us in celebrating what we hope will be one of the happiest days of our lives.

"The affection shown to us by so many people during our engagement has been incredibly moving, and has touched us both deeply.

"We would like to take this opportunity to thank everyone most sincerely for their kindness."
Details of the order of service were also released.

The bride will walk up the aisle to coronation anthem I Was Glad, by Sir Charles Hubert Hastings Parry, from Psalm 122.

It was composed for the crowning of Prince William's great-great-great grandfather, Edward VII, at Westminster Abbey in 1902.

The couple have chosen to use the Series One (1966) Book of Common Prayer ceremony.
Classical compositions by Elgar, Britten and Vaughan Williams will feature during the ceremony, alongside the hymn Jerusalem and the English melody Greensleeves.

St James's Palace said many of the "stunning" pieces were chosen by the royal couple for their "theatre".

The Prince of Wales and the Duchess of Cornwall, Prince Harry, Miss Middleton's parents - Carole and Michael Middleton - her sister Pippa and her brother James will all act as witnesses and sign the marriage registers.