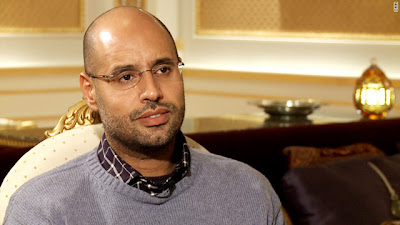 Tripoli, Libya (CNN) -- The envoy sent by Moammar Gadhafi to the West is testing foreign governments' willingness to accept one of the embattled Libyan leader's sons as his successor, a source close to the Libyan leadership said Monday.

Under the proposal, Saif al-Islam Gadhafi, 38, would take over from his father and help to usher in swift reform, the source said.

Once thought to be a leading reformer inside the Libyan government, Saif has emerged as one of his father's most visible defenders since the start of the unrest.

To avoid instability, the transition must "be a gradual handover of power," the source said. The source also stressed the need to negotiate a "respectful solution" so that the elder Gadhafi is not seen as being forced out. Moammar Gadhafi has led Libya for 42 years.

Libyan Deputy Foreign Minister Abdelati Obeidi met with Greek Prime Minister George Papandreou on Sunday. He arrived Monday in Turkey, where he is expected to continue talks.
Posted by Joshua Lopez at 11:40 AM