Pope's Calls For Peace Around The World 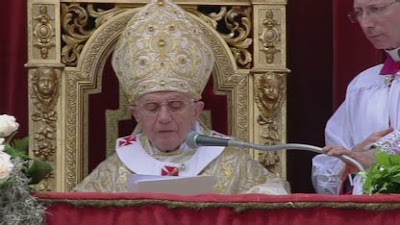 (CNN) -- Pope Benedict XVI called for peace amid ongoing conflicts in Africa and the Middle East and mentioned the plight of those in Japan during his annual Easter message Sunday.
The pope singled out Libya, saying, "may diplomacy and dialogue take the place of arms and may those who suffer as a result of the conflict be given access to humanitarian aid."
Forces loyal to Libyan leader Moammar Gadhafi have been battling rebels for control of parts of Libya ever since protests erupted in the country in February. Demonstrators first rallied against high unemployment and a delay in a government housing project, but they eventually called for an end to Gadhafi's four decades in power -- a protest that erupted into war.
The pope also urged the restoration of "peaceful coexistence" in Ivory Coast, where a long-running political stalemate led to violence that forced nearly a million people into the main city of Abidjan and left hundreds dead, according to aid groups.
The standoff only recently ended after President Alassane Ouattrara assumed power. The former president, Laurent Gbagbo, had refused to step down after he lost the election last year.
"There is an urgent need to tread the path of reconciliation and pardon in order to heal the deep wounds caused by the recent violence," the pope said in reference to the West African nation.
"In the countries of northern Africa and the Middle East, may all citizens, especially young people, work to promote the common good and to build a society where poverty is defeated and every political choice is inspired by respect for the human person," the pope said. "May help come from all sides to those fleeing conflict and to refugees from various African countries who have been obliged to leave all that is dear to them; may people of good will open their hearts to welcome them, so that the pressing needs of so many brothers and sisters will be met with a concerted response in a spirit of solidarity; and may our words of comfort and appreciation reach all those who make such generous efforts and offer an exemplary witness in this regard."
Finally, the pope said he hoped Japan would find "consolation and hope" in the aftermath of the March earthquake, tsunami, and nuclear crisis, "along with other countries that in recent months have been tested by natural disasters which have sown pain and anguish."
Posted by Joshua Lopez at 12:45 PM