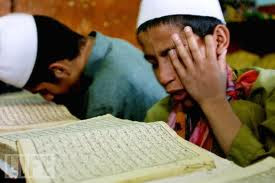 So Much For Religion I Guess! And the Islamic Authorities only see the need to violate people's privacy by charging into people's homes, cars and parks for so-called 'Khalwat.' Going on further in turning everything 'Haram!' What A Crying Shame!

(Malaysia) A year one school student believed to have been assaulted by a teacher on Thursday died at Sultanah Bahiyah Hospital (SBH) here today. Saiful Syazani Sopfidee, 7, of Sekolah Agama Rakyat Jejawi in Perlis died at 8:50am. He was admitted to the hospital in a coma on Friday.

Hazirah Chin,38, said before admission to SBH, her adopted son (Saiful) was taken unconscious to Tuanku Fauziah Hospital, Kangar at 1:40am on Friday. " I received a phone call from an ustaz who asked whether Saiful had epilepsy and I said no. "He said that he would like to take me to hospital as Saiful had been admitted to hospital and would be transfered to a hospital in Alor Setar," she said at SBH mortuary today.

Hazirah said that she saw blisters on Saiful's wrist and bruises to the eyes. Meanwhile, Saiful's father, Saiful Sopfidee Marzuki, 34, said Saiful was put up for adoption after his wife died three years ago. "The last time I met him was one year ago as I lived in Langkawi and only move back to Jitra one month ago." He was informed at 8am on Friday that Saiful was assaulted and lodged a police report after seeing bruises to the body.
Posted by Joshua Lopez at 1:28 PM